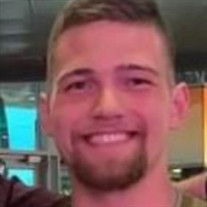 Zachary Marshall Horton, 21, of Bartlesville, Oklahoma, passed away on August 3, 2020. He was born in Tulsa, Oklahoma to parents Michael and Tanya Horton on March 11, 1999. Zac graduated from Bartlesville High School in 2017 and was a light to all who knew him. During high school, he took classes at Rogers State University in Bartlesville. Following his graduation from high school, Zac graduated from Tri County Tech’s Construction program in 2018. He was studying Construction Management at Oklahoma State University IT. He was preparing for an internship with Walters Morgan Construction Company and was working summers installing flooring. The greatest reward a person can receive is eternal life with our Lord. Zac accepted Jesus as his savior on Mother’s Day in 2008 at the age of 9. He was baptized at the First Nazarene Church. His earthy accomplishments included membership in the National Technical Honor Society, placing 2nd on state level job interview through Skills USA, and being selected for an internship at OSU IT, which is rare for a first-year student. Zac loved spending time with his friends and family, guns and shooting, watching and playing sports, and playing video games. He also loved to travel. He made it to 42 out of 50 states with the goal of visiting all 50 before he graduated college. Zac is preceded in death by his cousin Chris Graham in 2011 of Pryor, Oklahoma. He is survived by his loving parents, Michael and Tanya Horton, his sister that he adored, Tarah Horton, all of Bartlesville, his maternal grandparents Don and Jona Rade of Broken Arrow, maternal aunt and uncle Tami and Rodney Humphrey and cousin Patrick O’Brien all of Okmulgee. Paternal grandparents Orvill and Cindy Horton of Bartlesville. Paternal aunt Barbara Burruss also of Bartlesville and her grown children Dan and Hannah Brown of Joplin, Missouri, Damon Burruss of Tulsa, Sarah and Derek Close of Ochelata, paternal aunt and uncle Albert and Maria Horton of Harrison, Tennessee and their daughter Victoria of Norman. He is also survived by many family members, friends, loved ones and anyone who was lucky enough to have crossed paths with him. Zac, with his charismatic personality, sincere heart, and contagious smile will be one we will never forget. Visitation will be held from 5:00pm – 8:00pm on Thursday, August 6, and from 9:00am – 8:00pm on Friday, August 7th. Services will be held at the First Baptist Church in Dewey, Oklahoma at 1:00 pm on Saturday, August 8, 2020.

Zachary Marshall Horton, 21, of Bartlesville, Oklahoma, passed away on August 3, 2020. He was born in Tulsa, Oklahoma to parents Michael and Tanya Horton on March 11, 1999. Zac graduated from Bartlesville High School in 2017 and was a light... View Obituary & Service Information

The family of Zachary Marshall Horton created this Life Tributes page to make it easy to share your memories.

Send flowers to the Horton family.