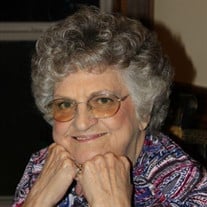 Wilma Ruth Medlock, 82, of Ochelata, went home to be with the Lord on Friday, December 25, 2020. She was born March 4, 1938 to parents George Washington Hess and Vera Delpha Hess. She married Archie Wayne Medlock on December 28, 1957. She... View Obituary & Service Information

The family of Wilma Ruth Medlock created this Life Tributes page to make it easy to share your memories.

Wilma Ruth Medlock, 82, of Ochelata, went home to be with the...

Send flowers to the Medlock family.