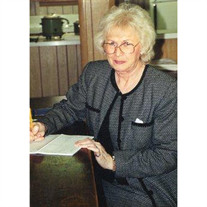 Wilma Jean Hollandsworth, lifelong resident of Barnsdall, passed from this earth to her heavenly home Wednesday, March 27, 2019 at the Journey Home in Bartlesville. She was 85 years of age. Wilma was born July 6, 1933 at Barnsdall to Guy Edward and Doris Kathryn (Wright) Buckles. She was raised and received her education in Barnsdall, graduating with the Class of 1951. In June of 1952, she attended Business College in Bartlesville; shortly thereafter going to work for Phillips Petroleum Co in the production department. On September 27, 1957 Wilma and Cecil E. Hollandsworth were united in marriage at the First Christian Church in Barnsdall. In 1964, Wilma left Phillips to be a stay at home Mom to their daughter who was born later that year. In 1967, Wilma went to work for Bareco Wax Refinery as a secretary until retirement in 1996. Wilma was a longtime member of the Barnsdall First Christian Church where she was very active, including being church secretary. She was a 51 year member of the PEO Sisterhood - Chapter DM of Barnsdall and volunteered at the nursing home. In earlier years, she enjoyed water skiing and roller skating. Those that survive and hold many cherished memories are her husband Cecil of 61 years and daughter Shannon (Hollandsworth) Wagner. Wilma was preceded in death by her parents and a brother Jerry Buckles. Memorial services will be held at 2:00 PM on Tuesday, April 2, 2019 in the sanctuary of the First Christian Church with Aaron Lawrence and Dake Shreffler, Co-Officiating. At her request, cremation will take place and her ashes will be laid to rest in the family plot at Ethel Reece Cemetery, Barnsdall. The family has requested that in lieu of flowers, memorial contributions in her memory be made to: Journey Home, 900 N. Washington Blvd., Bartlesville, OK 74006, http://thejourneyhomeok.com . The family would like to express their appreciation to Grace Hospice and Journey Home for their loving care of Wilma. Arrangements have been entrusted to the Peters-Stumpff Funeral Home of Skiatook, www.peters-stumpff.com

Wilma Jean Hollandsworth, lifelong resident of Barnsdall, passed from this earth to her heavenly home Wednesday, March 27, 2019 at the Journey Home in Bartlesville. She was 85 years of age. Wilma was born July 6, 1933 at Barnsdall to Guy Edward and... View Obituary & Service Information

The family of Wilma Jean Hollandsworth created this Life Tributes page to make it easy to share your memories.

Send flowers to the Hollandsworth family.