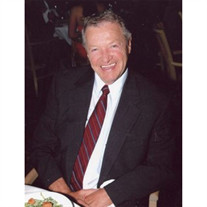 Memorial services for William Eugene "Sonny" Rhodes, 82, of Skiatook, Oklahoma will be held at 11:00 AM on Monday, September 22, 2014, in the Skiatook First Baptist Church. Arrangements are under the direction of Peters-Stumpff Funeral Home. "Sonny" died Saturday, September 13, 2014, in Tulsa. He was born on July 30, 1932 in Delight, Arkansas to Joe Shelton and Hazel Jackie (Holcomb) Rhodes. He was a graduate of Delight High School. Growing up in Delight, he was baptized in the Delight United Methodist Church, the church where he was also married. On February 1, 1953, he was married to Alice Blackmon. He served his country in the Navy during the Korean War. He became an engineer for IBM and Telex and worked on some of the first commercial computers for IBM. He managed the team of engineers that developed the first electronic voting machines in Dallas, Texas which was covered by all of the major network news sources. In 1967, he was one of three engineers from a selection of 25, 000 to be asked to participate in the European World Technical conference. A member of the Skiatook First Baptist Church, he was also a Mason and member of the Skiatook Masonic Lodge. Survivors include his wife, Alice Rhodes of Skiatook, Oklahoma; his son and daughter-in-law, Rusty and Tracy Rhodes of Eustace, Texas; his daughter, Debbie Keener of Broken Arrow, Oklahoma; and two grandchildren, Garrett Rhodes and Allison Clifton and her husband, Steven. Funeral services were held at 10:00 AM, Thursday, September 18, 2014 in the Delight United Methodist Church with Rev. Scott Neighbors officiating. Interment was in the Delight Cemetery. www.peters-stumpff.com

Memorial services for William Eugene "Sonny" Rhodes, 82, of Skiatook, Oklahoma will be held at 11:00 AM on Monday, September 22, 2014, in the Skiatook First Baptist Church. Arrangements are under the direction of Peters-Stumpff Funeral Home.... View Obituary & Service Information

The family of William E. Rhodes created this Life Tributes page to make it easy to share your memories.

Send flowers to the Rhodes family.