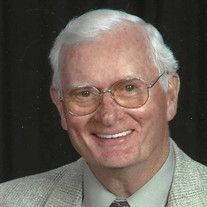 William J. (Bill) Hines went to be with his Lord on February 13, 2021. He was born with a twin sister in January, 1927 to Theodore and Edna Hines in Minnesota. He grew up on a farm there and attended first through eighth grades in a one room school house. He enlisted in the Navy in late 1944. He completed technical training in Norman, Oklahoma for aircraft maintenance (seeing OU and OSU play football in the fall of 1945). From there he went to Cherry Point, North Carolina. After the war he began courses at Mankato State College (now Minnesota State University Mankato). He met his future wife, Beverly Bares at a dinner for college students at the First Christian Church. He was called back into the Navy Reserves during the Korean War, and was stateside until he was released and returned to college. Bill and Beverly married on September 8, 1951. When he graduated in 1952 they moved to Bartlesville, OK. He worked there for Phillips Petroleum Company's Research and Development for 33 years, where he became their expert in gas chromatography. He retired as a Senior Analytical Chemist in 1985. He traveled to many countries for Phillips and did contract work for them and other companies for 10 years following retirement. He was an esteemed member of the Gas Processors Assn. Bill was very active at First Christian Church (DOC) in Bartlesville. He was an elder for more than 50 years, served as Chairman of the Board, Chairman of Trustees and taught Sunday School and youth classes. He was a charter Member of the Oak Park Lions Club and active in the Oak Park School PTA. He loved to white water canoe and became an avid golfer after retirement. Bill and Beverly wintered in Phoenix for a number of years before downsizing to a condo in Oklahoma. Beverly passed away in November of 2018 after they moved to Green Country Retirement Center in Bartlesville. Bill and Beverly were married for 67 years. They are survived by their four children, Amy Lambert (Ron), Timothy Hines, Laura Hines and Jay Hines; nine grandchildren, Paul, Mark, Nicole and Travis Lambert, Billy (Wm. J. II), and Kylie Hines, and Mayumi Layton, Jason and Ronilyn Galarse; and 11 great grandchildren. Also survived by his sister, Theo Miller (Morten) his Brother in Law Wesley Bares (Judy) and numerous nieces, nephews and cousins. Services are pending. In lieu of flowers, please send donations to the hospice where William was cared for in his final days https://www.thejourneyhomeok.org/make-a-donation or to First Christian Church (Disciples of Christ) PO Box 1177 Bartlesville, OK 74005

William J. (Bill) Hines went to be with his Lord on February 13, 2021. He was born with a twin sister in January, 1927 to Theodore and Edna Hines in Minnesota. He grew up on a farm there and attended first through eighth grades in a one room... View Obituary & Service Information

The family of William James Hines created this Life Tributes page to make it easy to share your memories.

William J. (Bill) Hines went to be with his Lord on February...

Send flowers to the Hines family.