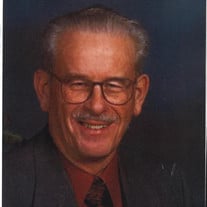 Mr. William Edgar “Eddie” Williams, 87, of Dewey, died Thursday morning, August 19, 2021 at his home in Dewey. Funeral services will be held at 10:30 A.M. on Monday, August 23, 2021 at the Dewey United Methodist Church with Pastor Rusty Husted officiating. Graveside services will be held at 2 P.M. on Monday at the Mt. Hope Cemetery in Independence, Kansas directed by the Stumpff Funeral Home & Crematory. The Williams family will receive guests at the funeral home on Saturday evening from 6 PM until 8 PM. Visitation for family and friends will be at the Stumpff Funeral Home on Saturday and Sunday from 9 AM until 8 PM each day. Mr. Williams was born on June 30, 1934 at Hutchinson, Kansas to Earl Samuel Williams and Martha Lucille (Parker) Williams. He grew up and received his education in western Kansas until moving to Independence, Kansas with his family in the late 1940’s. He graduated from Independence High School in 1952. Mr. Williams entered the United State Marine Corps in December of 1953 and served on active duty until January of 1956. While in the military he was married to Iris June Beck on April 8, 1954 at the Independence Methodist Church by Pastor Prince and they made their home in California while Mr. Williams completed his military obligation. Mr. and Mrs. Williams returned to Independence in 1956 and he attended Coffeyville Junior College for two years where he earned an Associates degree. He was also employed with his father’s burial vault business in Independence and he and Mrs. Williams became the owner/operators of the business in 1974 and continued to operate it until 1999. In 2002 they moved to Dewey to make their home and became members of the Dewey United Methodist Church. In 1987 Mr. Williams joined the Carson Masonic Lodge and became a 32nd Degree Mason and a Shriner and later became active in the Dewey Masonic Lodge. Mr. and Mrs. Williams also became members of the Eastern star in 1988 in Kansas and became active in the Dewey Eastern Star chapter after moving to Oklahoma. They were also very active in square dancing clubs and had been members of the Altamont Swing and Twirl club, the Promenade club at Independence, the Square Stoppers club at Independence and the Boot Scooters club in Dewey. Mr. Williams had also been a member of the Kiwanis Club in Independence where he had served as President and Lt. Governor. Survivors include his wife, Iris Williams of the home in Dewey, three children, Gayla Sue Pruett and husband David of Catoosa, Okla., Donald Williams and wife Michelle of Independence, Kansas and Kyle Williams of Dewey, five grandchildren, Wanda June Raisley (Brent), William Pruett (Joni), Ben Pruett (Tasha), Christopher Williams (Austin) and Samuel Williams and 13 great grandchildren. He was preceded in death by his parents, one brother, Joseph Williams and one sister, Patricia Lucille Muzechenko.

The family of William "Eddie" Edgar Williams created this Life Tributes page to make it easy to share your memories.