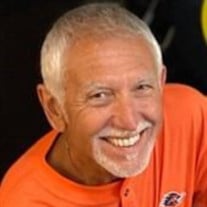 William Joseph Burger, age 65, went to see his beloved Jesus on August 30th, 2021. He is survived by his beautiful and hyper-organized wife, Judith Kathryn, his extraordinarily intelligent daughter, Jourdan Laine, his awkwardly quiet son-in-law Elijah Michael, and his two favorite people on the planet, grand kiddos Charlotte Mae and Elliott Isaiah. He is also survived by his sister Lori and her family, his brother John and his family, a number of Dinisi family members whom he adored, and a multitude of dear friends who he cared for beyond measure. William (also known as Bill, Billy, and the Most Handsome Man in the World) was a dedicated Occupational Therapy Assistant who loved helping others and who’s irreverent sense of humor kept those around him laughing nonstop. With ancestry traced back to the island of Sicily, his Italian roots were most apparent in the kitchen; he was known for his holiday lasagna and for buying all the “specialty pastas” that TJ Maxx had to offer. William loved Disney, Reeses Peanut Butter cups, NASCAR, NHRA and IndyCar (go get ‘em Ed Carpenter), and he had an obscene number of shoes in his closet, most of which were terribly bright colored. William enjoyed being outdoors, walking several miles every day in neon tennis shoes, and he tended to the yard with great care. He would be utterly distraught to learn that his wife has already accidentally killed several of his plants and replaced them with fake ones so that they are in full bloom year-round. An avid fisherman, William fully expected his heavenly mansion to have a lake behind it, full of prize-winning bass waiting to be caught and mounted on the walls. Everyone who knew William commented on his intelligence and wisdom; he was a student of history and was always reading about important world events. William was a staunch Republican, always happy to point out when others were wrong about politics. Surprisingly enough, in his final months he began to watch CNN and MSNBC; but we fully blame that development on his brain tumor. Most importantly, William loved Jesus with his heart, mind, soul, and strength, and understood that a relationship with Christ was paramount to salvation. He accepted Christ as an adult, was baptized, and pursued Christ relentlessly, setting a fine example for his loved ones and for those who were lucky enough to know him. “If at first you fail to see me, Let me tell you where I’ll be. I’ll be thanking Christ, my Savior, For saving a wretch like me. Look for me at Jesus’ feet.” At his request, there will be no service and his ashes will be spread in the Indian River in Florida. In lieu of flowers or plants, you may send a donation to: Spirit Church Attn: Missions 2121 S Madison Blvd. Bartlesville OK 74006

The family of William Joseph Burger created this Life Tributes page to make it easy to share your memories.

Send flowers to the Burger family.