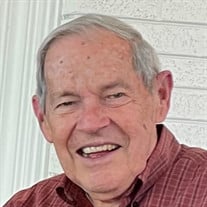 William Bryan Adrian (Bill) was born November 23, 1937 in Altadena, California and grew up in Hollywood, attending Hollywood High. He died October 9, 2021 at the age of 83 in Tulsa, Oklahoma having lived in Bartlesville for 20 years. In life... View Obituary & Service Information

The family of William Bryan Adrian created this Life Tributes page to make it easy to share your memories.

Send flowers to the Adrian family.