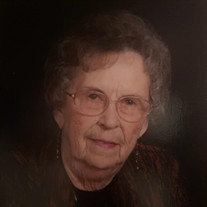 Mrs. Wanda Doloris Smith, 87, of Dewey, died at 5:30 A.M. on Tuesday, September 15, 2020. Funeral services for Mrs. Smith will be held at 2 P.M. on Friday at the Dewey First Baptist Church. Interment will be in the Dewey Cemetery directed by the Stumpff Funeral Home & Crematory. Friends who wish may call for visitation at the Stumpff Funeral Home on Thursday from 9 AM until 8 PM and the family will receive guests at the funeral home on Thursday from 6 PM until 8 PM. Mrs. Smith was born at Wildhorse in Osage County, Oklahoma on April 21, 1933 the daughter of Perry Arthur Jordan and Hazel (Tapp) Jordan. She grew up in the Wildhorse area and graduated from high school there in 1951. She then moved to Bartlesville where she was employed with the Cities Service Oil Company. She was married to Freddie Lee Smith on October 8, 1954 at Dewey, Oklahoma. They made their home at Dewey until moving to Ada, Oklahoma and then Abilene, Texas. They returned to Dewey to make their home in October of 1961. They operated the Dari-Delite in Dewey from 1961 until 1967. Mr. Smith was active in the oil and gas industry during his adult life and Mrs. Smith was active as a homemaker. She was a member of the Dewey First Baptist Church. Mrs. Smith is survived by one daughter, Janice Holland of Dewey, one son, Dwaine Smith and wife Trenda of Bartlesville, two sisters, Louise Miller and husband Jim of Bartlesville and Betty Schofield and husband, Joe of Bettendorf, Iowa, one brother, Bob Jordan and wife Terry of Dewey, three grandchildren, Jordan Holland and wife Dawn, Kendra Hall and husband Zach and Trenton Smith and wife Corey, and three great grandsons, Jaxon Holland, Colton Seger and Pacen Seger. Mrs. Smith was preceded in death by her husband, Freddie Lee Smith on September 2, 2010, her parents, three sisters, Frances Mayfield, Annabelle Huntz and Leona Lee and two brothers, Calvin Don Jordan and Aden Lee Jordan. A memorial fund has been established to the Youth Department of the Dewey First Baptist Church, P.O. Box 66, Dewey, Oklahoma, 74029. The family wishes to extend a special “Thank You” to hospice nurses Robin and Crystal

Mrs. Wanda Doloris Smith, 87, of Dewey, died at 5:30 A.M. on Tuesday, September 15, 2020. Funeral services for Mrs. Smith will be held at 2 P.M. on Friday at the Dewey First Baptist Church. Interment will be in the Dewey Cemetery directed by... View Obituary & Service Information

The family of Wanda Doloris Smith created this Life Tributes page to make it easy to share your memories.