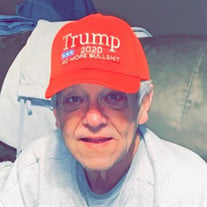 Wallace Ray Stough, 72, was born in Fort Wayne, Indiana on February 22, 1949, to Vera Lou and Ray Stough. He passed on Saturday August 28, 2021, at his home in Ramona, Oklahoma surrounded by his family. Wally was a beloved Father, Son, Uncle, Friend, and Papa. Wally was raised in Peru, Indiana until the age of ten where he moved to Powell County, Kentucky with his family. At the age of 18, he joined the army on April 4th, 1967. He was deployed and served in Vietnam from August 21, 1967, to August 15th, 1968. In the year 1970, he was honorably discharged. After being discharged, he worked in Modesto, California at Gallo Winery. Afterwards, he moved to Bartlesville, OK and worked at the Phillips Petroleum Company for 22 years. He retired in December of 2003 and spent most of his time visiting friends and family, traveling around the country, and spent countless hours with his grandchildren. He was the third eldest of nine siblings: Betty Cress of Conroe Texas, Louise Trent of Tampa, Florida, Kenneth Stough (Barbara) of Seymore, Indiana, David Stough (Judy) of Stuart, Virginia, Debbie Stough of Stanton, Kentucky, Cathy Pelfrey (Jerry) of Stanton Kentucky, Charles Poor (Delilah) of Clay City, Kentucky, and Barbara Slemp (Bat) of Stanton, Kentucky. He was proceeded in death by his mother and father as well as his sister Louise, brother-in-law Bud Cress, and brother-in-law Bill Trent. He is survived by his three children, Wally Stough Jr. of Spokane, Washington, Tabatha Branch and Tony Baycroft of Spokane, Washington, and Christi Sumner and Clint Sumner of Ramona, Oklahoma, his grandchildren, Caitlyn and Chelsea Sumner, Dylan Branch, Jaden Stough, and Madeline Stough. He had numerous nieces and nephews that he loved dearly. A visitation for family and friends will be held Thursday September 2nd, 2021, from 9am to 8pm with the family greeting friends from 6pm to 8pm at Stumpff Funeral Home in Bartlesville, Oklahoma. A Celebration of life will be held at Wally’s home on September 10th, 2021, at 6:30PM. His home address is 33623 N. 4000 Rd. Ramona, OK 74061.

Wallace Ray Stough, 72, was born in Fort Wayne, Indiana on February 22, 1949, to Vera Lou and Ray Stough. He passed on Saturday August 28, 2021, at his home in Ramona, Oklahoma surrounded by his family. Wally was a beloved Father, Son, Uncle,... View Obituary & Service Information

The family of Wallace "Wally" Ray Stough created this Life Tributes page to make it easy to share your memories.

Send flowers to the Stough family.