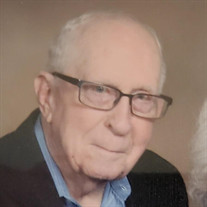 Von Lee Snyder passed away on October 6, 2021. He was born on January 5, 1931 in Douglas, Oklahoma. After growing up in the community of Merrimac in Pawnee County, his family moved to Enid, where he graduated from Enid High School in 1948. In 1949, while a freshman at Oklahoma A&M College (now Oklahoma State University), he met Elizabeth Ann Benson on a blind date to the Howdy Dance. After being drafted and serving in Korea, Von and “Ann” were married on January 22, 1956. They soon made their home in Bartlesville, where Von worked for National Zinc company for 10 years before becoming a master machinist at the Research Center at Phillips Petroleum Company. He worked there until retirement in 1992. Von and Ann had 3 children and enjoyed life, traveling all over the country with camping friends and relatives. He was a member of First Church in Bartlesville for over 64 years. Other groups Von enjoyed were the Methodist Family campers, Mutual Girls Club Tuesday House (now Heart Matters) and the Cherokee Chapter of the Green Country Clock Club. An avid outdoorsman, Von enjoyed fishing and hunting with family and friends. He loved clocks and watches and built grandfather clocks for many years with Hugh Hurley. His love of mechanical things led him to restoring old cars which included 3 1966 Ford Mustangs, 1 1965 Mustang, 1 1957 Ford Thunderbird, and a 1972 Volkswagen bug. He loved working with all kinds of machines and tools. Von is survived by his wife of 65 years, Ann, of the home; sister Jo Woolery of Oklahoma City, OK; daughter Sandra Lou Dickey of Houston, TX.; son Chris Lee Snyder and wife Phebe, of Broken Arrow, OK; daughter Sharon Fern LeStourgeon and husband Deron, of Canyon Lake, TX. Von had 5 grandchildren: Ben Dickey and wife Katie of Oklahoma City who had his 3 great-grandchildren, Marshall, Evan, and Brooks Dickey; Matt Dickey and wife Kayla of Oklahoma City; Megan Dickey of Tuscon, AZ; Maggie LeStourgeon of New Orleans, LA; and Lily LeStourgeon of Baton Rouge, LA. A celebration of life and funeral service will be held at First Church, Bartlesville on Saturday, October 9, 2021 at 2:00pm. In lieu of flowers, the family asks for friends to support Heart Matters, Bartlesville.

Von Lee Snyder passed away on October 6, 2021. He was born on January 5, 1931 in Douglas, Oklahoma. After growing up in the community of Merrimac in Pawnee County, his family moved to Enid, where he graduated from Enid High School in 1948.... View Obituary & Service Information

The family of Von Lee Snyder created this Life Tributes page to make it easy to share your memories.

Send flowers to the Snyder family.