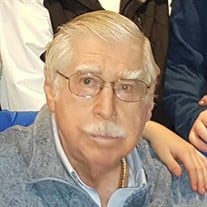 Von Dean Dabbs was born on Friday, April 13, 1928, at Fairview, Missouri, son of the late Joseph Fern Dabbs and Attie Crystal Stansbury Dabbs. He is survived by one daughter, Yvonne D Burger, and three grandchildren: Lisa M. O’Rourke, Ezekial A. Burger, and Arica L. Haywood; and five great-grandchildren; his brothers; Thomas F. Dabbs of Carthage, Missouri, and Max C. Dabbs deceased. He had a three-year enlistment in the Air Force during World War Two, was recalled in the Korean War for one year. Used all of his G.I. Bill, plus time on his own, at four different Colleges and four different Universities. Including service in the U.S. Air Force, and Education, Mr. Dabbs, was a Design Engineer, spent fifty-three years working mostly in Ordnance, Missiles, Aerospace, and Aircraft, designed tooling to build Missiles and Aircraft, was involved in the conception, and the design of three different product facilities. Designed three items that were patented, he accomplished the patent disclosure for the Company he worked for at the time. One of his last airplanes worked on, and the first one built with the computer, was the Stealth B-2 Bomber, he spent three and a half years, a Top-Secret project. During his working years, he held eight Secret and Top-Secret Clearances. Approximately the last twenty years were spent designing Airplanes, and Tooling to build Airplanes on the Computer, using four different software packages. Since his retirement in 1999, at the age of seventy-one, he has been on his property in Copan, Oklahoma, that he had called home since 1974. He was active all his life, and still designing and building things of necessity or simply to enjoy life at its best.

The family of Von Dean Dabbs created this Life Tributes page to make it easy to share your memories.

Send flowers to the Dabbs family.