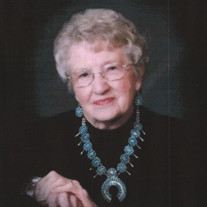 Viola Jane McMahon crossed over into glory at 8:35 p.m. on Saturday, March 12, 2022. Graveside services will be held at a later date in Arkansas City. In lieu of flowers, please make memorial contributions to the Guest Home Estates in Caney, 400 S. McGee St., Caney, KS 67333, (620) 879-5199. To send flowers or a memorial gift to the family of Viola Jane McMahon, please visit the Stumpff Funeral Home & Crematory Sympathy Store. Viola (Vi) Jane Wilson McMahon was born on July 16, 1919, and raised in Arkansas City. After completing her education, she worked for Miller Tin Shop, Ark City Chemical & Carbide Co., Dixie Portland Milling Co., and Ford Motor Co. She married Kenneth P. Davis on April 22, 1942. He was killed in World War II. She married Olen M. Brown in 1946, and they farmed in Ark City for 14 years. He was killed in an oil explosion on Feb. 16, 1960. She married John F. McMahon, of San Francisco, on May 16, 1969. At that time, Viola had relocated to California and worked as a secretarial buyer for Ampex Corp. All three husbands served in the military. She returned to college in 1960, then went to work for Rodeo Meat Packing Co. She relocated to Redwood City, Calif., where she began working at Ampex. Her whole working career was in business. After retiring, she and John moved back to her home in Arkansas City. She was actively involved in the church choir, which was always her greatest joy, having sung since she was 16 for weddings, funerals, events, and organizations. She had a beautiful soprano voice and sang like an angel. She was involved in the Arkansas City Music and Dramatics Club, Sweet Adeline’s, the hospital auxiliary for 25 years, and the United Methodist Women. Widowed once again in 1998, she moved in 2006 to Dewey, Okla., to be near her daughter, Anita L. (Davis) Rahn. She moved in 2012 to a cottage built for her Copan, Okla. When living on the farm, Viola gardened, canned, raised chickens, and filled the freezer with fryers. While living on the farm she directed the children’s choir at a small country church. She was always active, loved sports, and was always on the move. She loved to cook and have family meals, as well as get-togethers for friends. Viola was the sixth of eight children born to William Wilson and Martha Ann Beck. Her brothers were Robert, Edwin, and William. Her sisters were Belle, Lucille, Bette, and Rosetta. Viola had one daughter, Anita and Pete Rahn, of Copan, Okla., and one stepson, William and Linda McMahon, of San Jose, Calif.; five grandchildren, Leigh Ann Bane and Rod, of Fresno, Calif., Barry (deceased), Rachel and Stacy Smith, of Hydro, Okla., Lisa McMahon, of San Jose, Calif., and Brian and Sabrina McMahon, of San Jose, Calif.; nine great-grandchildren; three great-great-grandchildren; and lots of wonderful nephews and nieces.

Viola Jane McMahon crossed over into glory at 8:35 p.m. on Saturday, March 12, 2022. Graveside services will be held at a later date in Arkansas City. In lieu of flowers, please make memorial contributions to the Guest Home Estates in Caney,... View Obituary & Service Information

The family of Viola Jane McMahon created this Life Tributes page to make it easy to share your memories.

Viola Jane McMahon crossed over into glory at 8:35 p.m. on Saturday,...

Send flowers to the McMahon family.