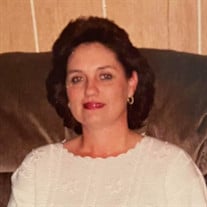 Vickie Lynn (McCarty) Inda, 65, met her heavenly father on October 11, 2021, at 3:35 pm. Vickie was born September 11, 1956, in Bartlesville, Oklahoma, to Lester and Betty Joe McCarty. She was raised in Bartlesville, where she received her education at Sooner High School. She married Butch Scullawl June 6, 1974, and together they had six children that were her whole world. On October 19, 2004, Vickie married the love of her life, Tim Inda. Vickie was known for many qualities including her love for homemade gifts that will be cherished forever, putting her family first, having a servant’s heart, and being an avid bingo player. She devoted her time and energy to anyone in need whether it was family, friends, church members, fellow bingo players, or even a stranger in the park. Vickie coached and was team mom for her children’s little league teams over the years and was passionately involved with all of her grandchildren’s activities. She was heavily involved in her church, New Life Pentecostal Holiness Church, where she served as the president of the Women’s Ministry, and she was a member of the church choir. She was also a member of the VFW Post #989 Women’s Auxiliary. Vickie is survived by her husband, Tim Inda; her six children, Bryan Scullawl and wife Heidi, Michael Scullawl and wife Katie, Mark Scullawl, Shelley Scullawl-Taggart, Regina Bretz and husband Matt, and Nathan Scullawl and wife Dessie; and niece, Jana Cotner who she adored; and her eighteen grandchildren, Skylar Scullawl and wife Sara, Madison Kerns and husband Austin, Kallee Scullawl, Brett Scullawl, Emalie Scullawl, Kailynn Scullawl, Haden Fout, Gus Rodriguez, Ethan Mathia, Brylinn Scullawl, Breanna Scullawl, Spencer Hayes, Jaz Bretz, Allie Scullawl, Walker Scullawl, Logan Scullawl, Kendra Lake, Liam Wamego; and one great-grandchild, Braxton Scullawl; her mother in law Joycelyn Inda, sister in law Diane Offut and husband John, Kyndra Denman, her sister in Christ, Suedel English, and many nieces, nephews, cousins and friends. She was preceded in death by her parents; her four siblings, Edith Moles and her husband Cecil, Lester Eugene McCarty, Shirly McCarty, and Kay Serl; and her father-in-law, Bob Inda.

Vickie Lynn (McCarty) Inda, 65, met her heavenly father on October 11, 2021, at 3:35 pm. Vickie was born September 11, 1956, in Bartlesville, Oklahoma, to Lester and Betty Joe McCarty. She was raised in Bartlesville, where she received her... View Obituary & Service Information

The family of Vickie Lynn Inda created this Life Tributes page to make it easy to share your memories.

Send flowers to the Inda family.