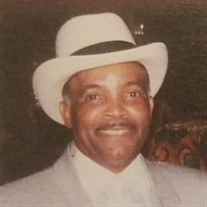 Venson Lamuel Cumby was born April 2,1936 to Ira Cumby and Mildred (Cumby)Wooten. He was educated and received his high school diploma from Douglas high school in 1956. There at Douglas he excelled in multiple sports and his classes. Which included being the quarterback on the only team in Bartlesville schools’ history to win a state championship in football. From Bartlesville he moved to Oregon and worked for Frank Gilcrease in the lumber industry. From Oregon he traveled to Los Angeles and was gainfully employed by Jack Kent Cook former owner of the LA Lakers, and Washington Redskins. During these early years of employment, he honed his skills as a chauffeur, bartender, and as a skilled cook. From LA his travels led to Akron Ohio where he was employed with BF Goodrich as a lab technician and for O.P. Thomas the CEO of company. Upon retiring from BF Goodrich. He started his own company titled: ‘My Price is Right’ reselling automobiles in Akron, Ohio. From Akron he moved to Tulsa Oklahoma where once again he joined the work force with Tulsa Public Schools in its Furniture/Delivery department. He then moved finally retiring fully to Little Rock Arkansas before moving home to Bartlesville where it all began. Throughout his life he was always very community and civic minded being involved in Big Brothers, PTA, a trustee for the Fulfill a Dream Program for Cancer Program. He also was a long-time board member of the Douglas Aires Organizing committee. His interest were many. He loved fishing, sports, dancing, and cooking, oh how he loved cooking for any and everyone. He had the joy of becoming friends of many sports and Hollywood artists over the years. If you ever took a tour of apartment. There are pictures of himself with many of them. Most of all his joys of his life were his children biological and all that he endeared as his children. In his later years and days, he came to realize to have been so blessed with all of his children and grandchildren!! He so enjoyed his family and friends of his life adventures. If you were in his presence, he beamed to tell you of his travels and his experiences and to share what he had learned from it all. He would say with his own words: “I’m blessed! “I’m blessed! I’m blessed. You don’t say I’m blessed without knowing who blesses!!! Venson leaves to cherish his memories his daughters: D’Ana Washington (her husband Harvey; Linda Parkinson (her husband John); Jacqueline Cumby; Joye Cumby; Saige Nellon; Ryan Nellon; His Sons: Gregory Trent; Darryl Warren(wife Dena) and his sister Lynn Harris; His sisters: Nora Marie Cruz (her husband Jose), Elzada Landrum, and Kimberly Hanson (her husband Princeton); His brother: John Wooten; He also leaves a host of grandchildren and great-grandchildren and many dear cousins, nieces, and precious friends both near and far. Preceding Venson in death were his parents: Ira Thelmore Cumby, and Mildred Inola (Cumby)Wooten, Wife Myrna Cumby, Wife Jean Cumby, Wife Elvira Cumby. His sisters: Mary Louise Littles, Ollie Vasti Cumby-Little, Zoe’s Diane (Cumby)Wilson, Rebeka Wooten-Johnson; His granddaughter: Erica Massey; His brothers: Thelmore Cumby, Robert Cumby, Ira Cumby, Philmore Wooten We the family would like to say thank you for all your prayers calls and many acts of kindness during this time. Also, we want to acknowledge the many healthcare providers over the years that provided exemplary care for our loved one!!! Just wanted you to know that you were also his family and he loved you all. Thank you dearly Angela Williams. Lastly to Greater First Baptist Church you were his home and his place of solace. He so loved you and missed you when he couldn’t be with you. Thank you. Thank you. Thank you. A memorial service will be held Saturday, April 9, at 11am at Greater First Baptist Church and is under the direction of Stumpff Funeral Home and Crematory.

Venson Lamuel Cumby was born April 2,1936 to Ira Cumby and Mildred (Cumby)Wooten. He was educated and received his high school diploma from Douglas high school in 1956. There at Douglas he excelled in multiple sports and his classes. Which... View Obituary & Service Information

The family of Venson L. Cumby created this Life Tributes page to make it easy to share your memories.

Send flowers to the Cumby family.