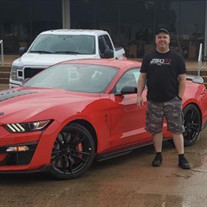 Tony M. Wyatt Jr., age 48, spouse of Jackie (Sunagoowie) Wyatt passed away August 27, 2021. Tony, son of Tony and Mary Jane (Smith) Wyatt, was born January 13, 1973, in Tulsa, OK. A celebration of life officiated by Darryl Wooten will be held at 10:00 a.m. on Thursday, September 2, 2021, Spirit Church, 2121 South Madison Blvd, Bartlesville, OK with burial at Memorial Park Cemetery, 4200 Nowata Rd, Bartlesville, OK. Tony graduated High School in Bartlesville, OK. He received his Associates degree from NEO in 1993 and graduated with a bachelor’s degree in Business from NSU in 1995. Tony began his career with Walmart Corporate Office in Bentonville, AR. Tony accepted a Computer Analyst position with ConocoPhillips, Bartlesville in late 1997 and was currently employed with COP at his death. In 2009, Tony went on his first and last blind date where he met Jackie. Tony married Jackie Sunagoowie September 15, 2012. Tony enjoyed many things, playing baseball, arcades, pinballs, and working on cars and ATV’s. Tony had a keen interest in cars and spent many hours working in his custom shop he designed and built. There wasn’t much that Tony could not do or figure out how to. He was always someone you could count on to help, no matter the situation and no matter what project he was currently working on. He had quite a collection of diecast models, arcades, pinballs, Star Wars, and 80’s memorabilia. He was especially fond of the Superman shield, TW logo, and p-40 Shark mouth which you will find displayed on his vehicles. He enjoyed spending time with his family; Tony was a great husband, father, brother, son, uncle and friend. Tony Wyatt Jr. is survived by his wife Jackie Wyatt of Bartlesville; Four children, Triston (23), Mallory (19), by a previous marriage, and Britton (7) and Brendon (3). His mother, Mary Jane Wyatt; brother Trevor and wife Tosha, nephews Becker and Bale. His father and mother-in-law, Jack and Debbie Sunagoowie. He was preceded in death by his father, Tony Wyatt Sr. In lieu of flowers, the family ask to make a donation to the Tony Wyatt Memorial Fund at Armstrong Bank in remembrance of Tony.

The family of Tony Wyatt created this Life Tributes page to make it easy to share your memories.

Send flowers to the Wyatt family.