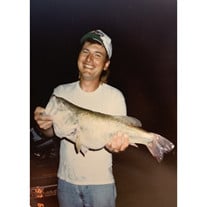 Todd Mitchell Perkins, age 56, of Skiatook, passed away at 5:40 am Tuesday, November 2, 2021 at his family home in Skiatook, after a courageous battle with Pancreatic Cancer. He was born September 3, 1965 in Tulsa, Oklahoma to Ellison and Norma Perkins. Todd grew up working alongside his parents on the family farm west of Skiatook where he was taught the value of hard work, good citizenship, honesty and high morals. He attended Skiatook Public Schools and graduated from Skiatook High School in 1983. At the age of 22 he began working at Nordam in Tulsa, Oklahoma where he continued to work for 34 years as a Master Aircraft Mechanic. When he was younger, he enjoyed trapping and riding dirt bikes with his childhood friends. He had a love for fishing bass tournaments with friends and his son-in-law throughout the years. Todd is survived by his mother, Norma Perkins; wife of twenty years, Emily Perkins; daughter and son, Bethany Bersche and Ellison Perkins; son-in-law, Jeremy Bersche; future daughter-in-law, Taylor Rogers; grandchildren, Paisley and Lilly Bersche; and brother, Eric Perkins all of Skiatook, Oklahoma. Todd was preceded in death by his father, Ellison Perkins; and son, Paul Perkins. Todd loved God, his family, and friends dearly. The family's deepest appreciation goes to Dr. Tim Bushyhead, Tama Chadwick, LPN, and Kendra Soley for treating Todd with such care and respect during his illness. Cremation services are being provided under the direction of the Peters-Stumpff Funeral Home. A celebration of life will be held at Skiatook Lake on November 14, 2021. Flowers can be sent to the family residence at 5550 W. Country Rd, Skiatook, Oklahoma 74070.

Todd Mitchell Perkins, age 56, of Skiatook, passed away at 5:40 am Tuesday, November 2, 2021 at his family home in Skiatook, after a courageous battle with Pancreatic Cancer. He was born September 3, 1965 in Tulsa, Oklahoma to Ellison and Norma... View Obituary & Service Information

The family of Todd Mitchell Perkins created this Life Tributes page to make it easy to share your memories.

Send flowers to the Perkins family.