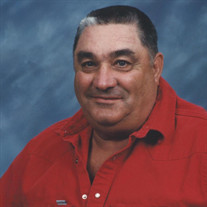 Longtime PSO serviceman and Osage County resident, Thomas (Tom) Eugene Williams, passed away on December 14th in Bartlesville, Oklahoma, following a brief illness. Tom was born on January 27th, 1941 in Barnsdall, Oklahoma, to W.G. and Fern (Auschwitz) Williams. Tom received his education from Barnsdall Public Schools where he was active in the Trade & Industries class. Tom worked on various ranches, helped move houses, and worked in the oilfield after high school. In the early 1960’s, he began trimming brush for what is now AEP-PSO. Early in his career, he relocated to various areas in Oklahoma and worked his way up in the company to Journeyman Lineman, then later Serviceman for much of Osage County. He later retired from AEP-PSO in 2006 after 42 years of service. When Tom was younger, he was active in the Barnsdall Jaycees. He built a smoker at his home and helped cook the BBQ for the annual Bigheart Day BBQ. He also loved to participate in the Jaycees Annual Haunted house, often spending hours making the haunted house for all the kids in town to enjoy. Tom was also active in the rural fire fighter’s association, local rural water district, and enjoyed ranching and raising cattle for many years prior to his retirement. Tom married Gleaner Ruth (Butler) on February 9, 1963 in Bartlesville, OK. She and Tom were married until her death in 2017. Tom and Ruth were blessed with four children: Thomas Jr., Tommy, Tonya, and Tammy. He enjoyed his children, grandchildren, and great-grandchildren, and his dog, Kendra. Tom was survived by his son, Tommy and Lora Williams of Bartlesville, Oklahoma and his daughter, Tonya and Tom Nash of Nixa, Missouri, 7 grandchildren, Ryan and Cassie Holcomb, Megan and Joey Bills, Jeremy and Silken Swait, Brandi Williams, Jennifer and Jason Bass, Jessica and Michael Sullivan, Taylor Nash, 9 great-grandchildren, Cael, Christian, Addi, Ella, Jasper, Hallie, Audie, Hazen, and Griffin. He is survived by his brother, Joe Williams, and his sisters, Jeanne Campbell and Faye Wickware. Tom was preceded in death by his parents, his wife, Gleaner Ruth, and his children, Thomas Jr. and Tammy. In lieu of flowers, the family suggests making memorial donations to the American Heart Association or the American Diabetes Association.

The family of Thomas Eugene Williams created this Life Tributes page to make it easy to share your memories.