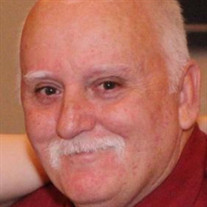 Thomas (Tom) Dale Edwards went from labor to reward on March 1, 2022, surrounded by his children singing old hymns. Tom was born in Bartlesville, Oklahoma to Dale Edwards and Doris Jean Quillen on December 11, 1957. Tom graduated from Roy High School in 1976. After graduation, Tom had a brief stint in the Navy. After his service, he worked on the railroad for 15 years, 5 of which were spent as Track Foreman. Tom was known as a jack of all trades for his carpentry and woodworking abilities. He became widely known as a skilled welder where he spent some time proudly building grand Navy ships. Outside of his career, Tom was a very accomplished man who went on to win numerous awards in wrestling and rodeoing. Some of his other passions included being a traveling pastor and evangelist. He enjoyed preaching the Gospel to all who would listen and watching old westerns with his good ole' dog Charlie and fishing. Tom loved spending time playing with his children and grandchildren. He enjoyed making everyone smile and encouraging everyone who crossed his path. Tom’s proudest achievement was being saved and baptized in the Holy Spirit with the evidence of speaking in tongues. He enjoyed reading God’s word, sharing his convictions, and compelling others to surrender to the power of Christ. His greatest passion in life, however, was his family. Tom had a large family which he loved dearly. To his children, he was more than just a father, he was a friend, a shoulder to cry on, and most importantly a never-ending source of wisdom in their time of need. Tom also had an infectious laugh and a wonderful sense of humor. Tom was preceded in death by his sons, Jeremiah Edwards and Kolton Edwards, and Parents, Dale and Doris Edwards. He is survived by his children, Rachel Edwards, Leah (Terrence) Gibson, Jasmyne (Dylan) McCabe, Tiphanni (Traven) Pollard, Nathan Edwards, and Trevor Edwards, and 14 Grandchildren. Tom will be missed, but his legacy will forever be cherished in the hearts of his loved ones.

The family of Thomas Dale Edwards created this Life Tributes page to make it easy to share your memories.

Send flowers to the Edwards family.