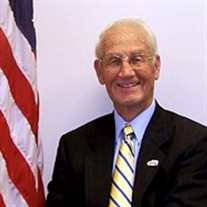 Mr. Theodore “Ted” Duane Lockin, 89, former City of Bartlesville Mayor and Council Member, died at 8:14 A.M. on Sunday, October 31, 2021, in the Green Country Village in Bartlesville, Oklahoma. Ted Lockin was born on December 16, 1931, in Cherokee, Iowa to Wayne Raymond Lockin and Leona May (Brooks) Lockin and was raised in Clarinda, Iowa. He attended Northwestern Missouri State College where he received his Bachelor’s Degree in Business and Economics and then at Drake University in Des Moines, Iowa where he earned a Master’s Degree in Business. He served in the United States Navy during the Korean Conflict from January 1951 until receiving his Honorable Discharge on November 2, 1954.Ted was married to Anna Maxine Dillon on August 24, 1951, in Clarinda, Iowa. They made their home at Maryville, Missouri, Des Moines, Iowa and Overland Park, Kansas. They came to Bartlesville to make their home in 1970. Ted was employed with Phillips Petroleum Company in various management positions for 30 years until his retirement. He was the Manager of the Credit Card Division and was responsible for the Downstream PC Development activity. He was later the co-owner in the business of Premier Motors in Bartlesville with his daughter Ann and son-in-law, Craig. Ted served as a Bartlesville City Council member representing Ward 1 from 1997 to 2005 and again from May 2011 to December 2016. He also served as Vice Mayor from 1997 to 1999 and as Mayor from 2000 to 2005. He was a member of the Bartlesville Rotary Club, Bartlesville Chamber of Commerce and the American Legion. He served the City of Bartlesville on the Water Resources Committee, Adams Municipal Golf Course Committee, Bartlesville History Museum Board and the Mayors Committee on Concerns for the Disabled. Ted is survived by his wife, Maxine Lockin of Bartlesville, three children, Doug Lockin and wife Patricia of Houston, Texas, Ann Lockin Hacker and husband Craig of Ramona and Linda Lockin Ricks and husband Charles of Broken Arrow, seven grandchildren, Celeste Lockin Chumlea and husband Grant, Julia Lockin, Chris Hacker, Darren Hacker and wife Elise, Lisa Hacker White and husband Joe, Angela Ricks Mayes and husband Bryce, and Laura Ricks Fincher and husband Matt, and seven great grandchildren, Weston Chumlea, Josephine Chumlea, Julian Hacker, Zoey Hacker, Mikah Hacker, Titan Hacker and Gage Hacker. He was preceded in death by his parents and by a son, Steven Lockin in 2012. In lieu of flowers a memorial fund has been established and those who wish may send their contributions to The Journey Home, 900 N.E. Washington Blvd., Bartlesville, Oklahoma, 74006. Memorial services for Mr. Lockin will be held at 1 P.M. on Thursday, November 4, 2021, in the Community Hall at the Bartlesville Community Center under the direction of the Stumpff Funeral Home & Crematory. Friends who wish may sign the online guest book and leave condolences at www.stumpff.org. Legacy Touch: D8WFTQMB

The family of Theodore "Ted" Duane Lockin created this Life Tributes page to make it easy to share your memories.

Send flowers to the Lockin family.