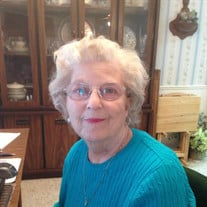 Mrs. Thelma Pope Blackburn, 81, of Bartlesville, died at 4 A.M. on Tuesday, December 1, 2020. Graveside funeral services will be held at 11 A.M. on Friday, December 4, 2020 at the Memorial Park Cemetery with Rev. Dr. T. Lee Stephens officiating. Funeral services and interment are under the direction of the Stumpff Funeral Home & Crematory. Visitation will be at the Stumpff Funeral Home Thursday from 9 AM until 8 PM and the family will receive guests for visitation Thursday from 6 PM until 8 PM. Mrs. Blackburn was born at Clinton, North Carolina on December 20, 1938 the daughter of Fulton and Kathleen (Waters) Pope. She grew up and received her education in North Carolina. She was married to Richard Glenn Blackburn at Clinton, North Carolina on October 16, 1960. Mr. Blackburn became affiliated with Phillips Petroleum Company in Raleigh, North Carolina and his career took them to Boston, Massachusetts in 1965, Hackettstown, New Jersey in 1968, Atlanta, Georgia in 1971 and then to Bartlesville in 1976. They have remained in Bartlesville since that time and Mrs. Blackburn was active as a homemaker. She also was a teacher for special needs children in Bartlesville, the Kid’s Crisis Line, the Samaritan Homeless Council, did volunteer work for Veterans in the area, was active as a volunteer for the Washington County Election Board for 35 years, and was an active member and volunteer at the St. Luke’s Episcopal Church since 1976. She was also a member and President for 20 years of the United Daughters of the Confederacy, member of the Daughters of American Revolution and a member of the Red Hat Society. Mr. and Mrs. Blackburn celebrated their 25th Anniversary in 1985 with a three week trip to Europe. Mrs. Blackburn is survived by her husband, Richard Glenn Blackburn of the home in Bartlesville, one daughter, Tina Cooper and husband Shan of Princeton, Texas, one son, Christopher Glenn Blackburn of Pryor, Okla., three grandchildren, Austin Fisher, Dylan Fisher and wife Kensey and Gavin Pierce and one great grandchild, Elliott Fisher. Mrs. Blackburn was preceded by death by her parents. In lieu of flowers friends who wish may send their memorial donations to: Claremore Veteran Center, 3001 W. Blue Starr Drive, Claremore, Oklahoma 74017. A recording of Mrs. Blackburns's service can be viewed at the link below: https://www.oneroomstreaming.com/view/authorise.php?k=160711599788790

The family of Thelma Pope Blackburn created this Life Tributes page to make it easy to share your memories.

Send flowers to the Blackburn family.