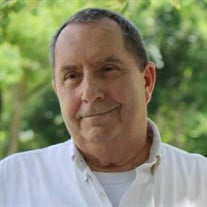 Terry Ray Owens Sr was born to Earl & Phyliss Owens on April 25th, 1947 in Snyder Oklahoma. At around 3 years old the family moved to Nowata, Oklahoma where he lived most of his life. He attended Armstrong & Alluwe schools, and eventually went on to graduate from Oklahoma State University School of Technical Training with a degree in Auto Mechanics. He served in the United States Army and was stationed in Korea. After serving in the Army he came home to work for The Bureau of Mines, he also farmed and raise cattle, then went on to work for Disan Corp as a CNC machinist where he ultimately retired. He loved gardening, working outside, getting coffee every morning at The Depot, & working for Disan. Terry was proceeded in death by his parents and his older brother Earl Wayne Owens. He is survived by his partner of 12 years Debra Weaver of Nowata, His brother Dennis and wife Brenda Owens of Nowata, Sister Beverly and husband David Tevebaugh of Miami, Daughter Becky McElroy and partner Gary Phillips of Dewey, Son TJ Owens of Bartlesville, Son Troy Owens and fiancé Terrah Parks of Claremore, Son Dan and wife Pam Robinson of Bartlesville, Daughter Amy White of Chelsea, Daughter Kimberly and husband Preston Alexander of Okmulgee, Daughter Adelia and husband Justin Lamberson of Haskell, Grandchildren Trent McElroy, Jessie McElroy, Tony McElroy, Cory Nichols, Damen Nichols, JD Carey, Rylie Carey, Kaytelynn Lamberson, Stephen Lamberson, Luke Robinson, Hunter Robinson, Taylor Robinson, Maki Robinson, Chloe Fuller, Jr White, and Naomi White, as well as 13 great grandchildren, many nieces, nephews, cousins, and friends. At his request there will not be a memorial service, but the family would like to extend an invitation to all to join them at the Depot Café in Nowata Oklahoma to share memories and stories of Terry’s life. The event will be this Saturday, March the 26th from 2PM to 5PM. Any donations that you would like to make in his memory can be made to St. Jude Children’s Hospital.

Terry Ray Owens Sr was born to Earl & Phyliss Owens on April 25th, 1947 in Snyder Oklahoma. At around 3 years old the family moved to Nowata, Oklahoma where he lived most of his life. He attended Armstrong & Alluwe schools, and eventually... View Obituary & Service Information

The family of Terry Ray Owens Sr. created this Life Tributes page to make it easy to share your memories.