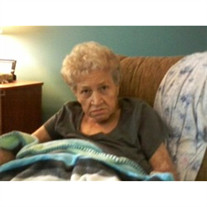 Graveside services for Tarshia Ann Tharp, 71, of Skiatook, OK were held Thursday April 26, 2018 at 2:00 p.m. at Osage Garden Cemetery at the Veterans Memorial Building in Skiatook, Oklahoma, with  Jerry Stumpff officiating.             Interment in Osage Garden Cemetery in Skiatook, OK, was under the direction of Peters-Stumpff Funeral Home.  Casket bearers for the service were David Tharp, Tony Tharp, Jerry Hall, Dennis Hall, Everett Enkey and Drew Tharp. Honorary casket bearers for the service were Megan Tharp and Cliff Brown. Musical selections for the service were "Sissy's Song", When I Get To Where I'm Going" and "I Can Only Imagine".                    Tarshia passed away on April 23, 2018, at Clarehouse in Tulsa.   She was born on December 11, 1946, in Poteau, OK to Calvin Lamont and Ruby Merice (Bandy) Hall.  Tarshia  was raised an educated in and around Tulsa.  She graduated from Tulsa Central High School.  She married Harold Dean Tharp in March of 1966, they made their home in Tulsa before moving to Skiatook 32 years ago. Tarshia loved sewing, fishing woodcrafts and spending time with her family especially her grandkids.   Tarshia is survived by her husband Harold of the home; three children: Tony Tharp of Skiatook; David Tharp and Janet of Jackson, TN; Deana Brown and husband Cliff of Bartlesville; five siblings: Calvin Dewayne Hall, Steven Dennis Hall, Shelia Scarbrough, Jerry Lee Hall all of Tulsa; Onie Scott of Mannford and seven grandchildren.             She was preceded in death by her parents

The family of Tarshia Ann Tharp created this Life Tributes page to make it easy to share your memories.

Send flowers to the Tharp family.