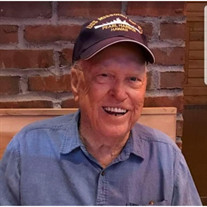 Memorial services for Steve Allen Petty, 80, of Skiatook, OK, will be held Saturday, August 31, 2019 at 1:30 p.m. at Peters-Stumpff Funeral Home Chapel in Skiatook, Oklahoma, with Randall Petty officiating. Interment in Osage Garden Cemetery is under the direction of Peters-Stumpff Funeral Home. Steve passed away on August 27, 2019, in Tulsa, Oklahoma.  He was born on December 20, 1938 in Brownfield, TX to Sterling A. and Viola (McAnally) Petty.  Steve was raised and educated in Texas.  Steve joined the United States Airforce in 1957 where he served on the air fire rescue force and the fire protection service.  After leaving the Air Force he worked as a union sheet metal worker in Texas, later Steve moved to Alaska to work on the Trans Alaska Pipeline.  On April 18, 1963 Steve married Sandra Rose Wentworth in Texas.  In August of 1980 they moved to Skiatook.  After moving to Skiatook Steve worked for Tulsa Welding School as a sales representative, later going to work for Walmart as a Garden Center Associate. Steve is survived by his wife Sandra of the home, three children: Randall Petty and wife Donna, Rhonda Perigo, Cheri Hurd, a sister Elouise Embry, four grandchildren: Zachary Petty, Joseph Petty, Trae Hurd, Chaz Gardner, two great grandchildren: Titus and Nevele. He was preceded in death by his parents.

The family of Steve Allen Petty created this Life Tributes page to make it easy to share your memories.

Send flowers to the Petty family.