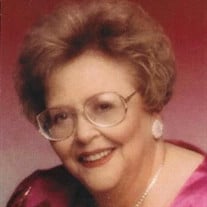 Shirley Ann McClintock, 83, of Bartlesville, Oklahoma, died on Tuesday, September 8, 2020. She was born to parents Thomas Cade Elkins and Eula Smith Elkins on September 28, 1936 in Henderson, Texas. She graduated from Lloyd Star High School in Mississippi and attended classes at the College for Genteel Ladies in Mississippi. Shirley married William McClintock on June 22, 1957. She would go to work as a secretary for Philips Petroleum. Shirley would make the Bartlesville area her home for 55 years. Shirley loved this community and was extremely involved. She was a member of the Bartlesville Lions Club, active in the League of Women Voters, a member of the Musical Research Society, and was a vocally trained singer who sang with her church choirs and several other organizations throughout the years. She was especially happy with the song she wrote and published entitled ‘He Arose’. She also served on many organizations’ scholarship committees and delivered many awards in person. Shirley was the past Royal Matron, past Grand Historian of Amaranth, Court 26, past Matron of the Bartlesville Eastern Stars Chapter 142, past Grand Representative of Scotland in Oklahoma, Order of the Eastern Stars. She attended conventions for the Eastern Stars, Amaranth, and White Shrine in Oklahoma and other parts of the United States, as well as internationally. Shirley especially loved to spend time with her family. She enjoyed playing an active role in her children, grandchildren, and great-grandchildren’s lives. Shirley is preceded in death by her father, her mother, Earl Elkins, Tommy Elkins, Fred Elkins, Frances (Elkins) Bessonette, Betty (Elkins) Carter, Susan (McClintock) McCollough and Paul Graf, spouse of Michelle. She is survived by her husband, William McClintock, her sister Lois (Elkins) Lightsey, her unofficial sister Karen (Bessonette) Holcomb, daughter Teresa (McClintock) Hawkins, son-in-law David Hawkins, son-in-law Bryan McCollough, granddaughter Stacy (McCollough) Buchanan and her husband, Nathan Buchanan, granddaughter Michelle (McCollough) Graf, granddaughter Jessica Hawkins, great-grandsons Michael Holiday and Parker Graf and great-granddaughter Lilith Buchanan. A memorial service will be held at a later date.

The family of Shirley Ann McClintock created this Life Tributes page to make it easy to share your memories.

Send flowers to the McClintock family.