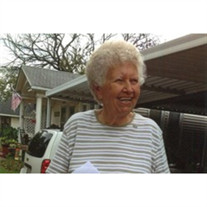 Funeral services for Shirley Jane Graham, 78, of Hominy, Oklahoma were held Thursday February 1, 2018 at 1:00 p.m. at the First Assembly of God Church in Hominy, OK with Pastor Clifton Phelps officiating.               Interment in Prairie View Cemetery in Prue, Oklahoma was under the direction of Peters-Stumpff Funeral Home.  Casket bearers for the service were Billy Horton, Kevin Burris, JR Horton, Brian Dunn, Branden Hambright and Scott Hambright.  Honorary casket bearers were Jack Horton and Joe Hambright.   Shirley passed away on January 29, 2018 at Jane Phillips Medical Center in Bartlesville, Oklahoma.  She was born October 11, 1939 in Prue, Oklahoma to Nemi and Ruby (Parker) Horton.  Shirley was a graduate of Prue High School.  She worked as a dietician for Hissom Children Home in Sand Springs which she retired from.  After being retired for a while Shirley went to work part time at Powell Funeral Home for 8 years. Shirley was a longtime resident of Hominy where she was a member of the First Assembly of God Church. Everyone that knew her was aware that she believed in the power of prayer and was a prayer warrior.  She and her sister ??Wilma would have prayer every night over the phone.  She was active in her church leading hymns on Sunday and playing the piano which she did by ear.  Shirley always tried to be positive about any situation, but she didn't have a problem with telling you what she thought. She joined the weight watchers program and spent a lot of time out doors walking to succeed in that program.  Shirley was meticulous about her house, it was a requirement that you take your shoes off before entering.  She made sure everything was in order.  Shirley was loved by many and will be missed greatly.   She is survived by her son Raymond Horton and wife Sharon of Tulsa; three grandchildren: Janna Horton-Burris, JR Horton both of Tulsa; Breanna Horton of Broken Arrow; seven great grandchildren: Melissa Young, Hayley Young, Brittnay Young, Grace Horton, Kelsey Burris, Kylea Burris, Able Hunter, a brother Jack Horton, two sisters: Wilma Jean Stephens and husband Kenny, Pamela Hambright and husband Joe all of Hominy; a step son Larry Duane Graham and numerous nieces and nephews.   She was preceded in death by her parents, three brothers Dale Horton, James "Stormy" Horton, Danny Horton and a sister Marybelle.

The family of Shirley Jane Graham created this Life Tributes page to make it easy to share your memories.

Send flowers to the Graham family.