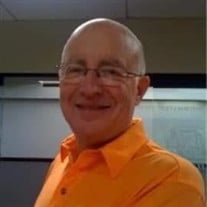 Sheldon “Shelly” Jay Handelman, 74, passed away on Thursday, February 17, 2022, in Bartlesville, Oklahoma. He was born to Joseph and Florence (Slodow) Cream in Brooklyn, New York on September 20, 1947. Shelly was adopted and raised by Charles and Lee (Chernack) Handelman in Downey, California. After a lengthy search, he was reunited with his biological mother and full siblings on July 15, 2017, in Newport Beach, California. Shelly served in the U.S. Army from August 1967 to August 1969. He was a proud Vietnam Veteran. Shelly retired from IBM in 1985 and Oklahoma State University in 2018. He loved to watch his grandchildren play sports and his grandson’s sprint car races. He enjoyed western movies, Star Wars movies, and he spent a lot of time at the shooting range. Shelly was preceded in death by his biological parents, Joseph and Florence Cream; his adoptive parents, Charles and Lee Handelman; his first wife, Nancy (Combs) Handelman; two children, Tamara Lynn and Shawn Charles Handelman; and his brother Robert Cream. Shelly is survived by his wife, Donna; his daughter Katie and (Cody) Wann; four step-children, Lance and (Julie) Silva, Jeremy and (Kelli) Silva, Stephanie and (Kelly) Banks, and Casey Short; his sister, Jan Rosen and brother, Joseph Cream. He enjoyed and cherish his nine grandchildren, Madelyn and Hunter Wann; Aidan, Baron, Tatum, and Carson Silva; Scout and Aysen Offutt; and Sable Banks. Funeral services for Shelly will be held at 10 a.m. on Tuesday, February 22, 2022, at the Stumpff Funeral Home Chapel. He will receive military funeral honors at 11 a.m. on Friday, February, 25, 2022, at Fort Gibson National Cemetery in Fort Gibson, Oklahoma. For those who may wish to send a memorial, the family requests donations be made to The Journey Home, 900 NE Washington Boulevard, Bartlesville, Oklahoma 74006.

The family of Sheldon "Shelly" Jay Handelman created this Life Tributes page to make it easy to share your memories.

Send flowers to the Handelman family.