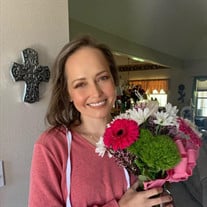 Shawndra D’Ann Hanes entered into God’s Glory in Heaven on Sunday, November 29, 2020. She was welcomed into Heaven by her heavenly Father and many family members. She was born in Shamrock, Texas on March 10, 1984. She is the beloved daughter of Patty Blankenship and her stepdad, Bob Blankenship of Bartlesville, Oklahoma, and her dad Tommy stags of Shamrock, Texas. She was raised in Shamrock and attended school there until 1995 where she moved with her mom to Borger, Texas. She graduated Borger High School with the class of 2002. She later moved to OKC, Oklahoma where she attended Duncan Brothers Hair School. She was not able to complete the schooling due to having kidney failure and having to start dialysis at the time. She received her first kidney transplant in August 2006 and later lost it to severe kidney rejection. She received her second transplant October 2011 and had it until 2020. During this time on August 3, 2013 she was married to James Hanes of Amarillo, Texas for a few years until they later separated and got divorced. In spite of all the hard years with all the different health issues she suffered with, Shawndra lived an amazing life and had many great friends and a loving family that to this day are still a huge part of her life. Her kindness and love for those around her and her zest for life made a huge impact on those who knew her and loved her. She had such a love for God and served him the best she could during her short life. She wanted others to see Jesus shining through her. Her wish is that all her friends and family will seek God out and come to love him and have a relationship with him. Shawndra is survived by her parents, her older sister, Brenna Hunter and her husband, Todd of Dallas, Texas, her older brother, Robert Horton and his wife Jennifer and their daughter , Bailey Horton of Colorado Springs, Colorado, her Aunt Dixie pace and husband Roger of Shamrock Texas and cousins Mike Pace of Altus, Oklahoma, Kristi Slocum of Amarillo, Texas and second cousins Jeremy Pace and his family, Jacob Pace, Gavin Pace, Gabriel Pace, Matt Slocum, Kristin Slocum and Cody Slocum. Preceded in death is her grandparents, Loren and Dorothy Jones, Mt Staggs and Uncle Duane Jones and his Wife Joyce Jones and her cousins Joey Pace, David Pace and Noah Pace.

Shawndra D&#8217;Ann Hanes entered into God&#8217;s Glory in Heaven on Sunday, November 29, 2020. She was welcomed into Heaven by her heavenly Father and many family members. She was born in Shamrock, Texas on March 10, 1984.... View Obituary & Service Information

The family of Shawndra D'Ann Hanes created this Life Tributes page to make it easy to share your memories.

Send flowers to the Hanes family.