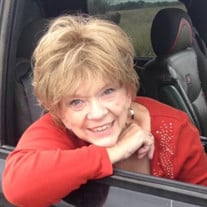 Sharon Kay Wilson’s journey here on earth ended June 15, 2020 and her new journey began immediately afterwards in Heaven with her Lord and Savior. Sharon spent many years loving her family and Jesus. She would suggest that everyone not leave this world without Jesus in their heart. She made that decision at a young age, but didn’t get serious about it until she was about 36 years old. She always regretted the years she made God last on her list. She was born on May 7, 1952 in Bartlesville, Okla., to Ralph L. and Mildred L. Gordineer. She spent most of her elementary years in Bartlesville attending Lincoln School. In 1963 she began school at Wann. She said it was one of the best things that ever happened to her. She was afraid it was going to be awful, but instead people were so friendly and welcomed her. In 1968 she met Lonnie Wilson, the love of her life. They dated for 2 years in high school and had the time of their lives. She excelled in school and graduated from Wann High School as Valedictorian in 1970. Shortly after, Lonnie and Sharon were married on August 14, 1970 in the Wann Baptist Church. She is survived by her husband Lonnie Ray Wilson. After their marriage Lonnie attended college at NSU while Sharon got her first job at the local newspaper office, The Pictorial Press. In just a few years the first baby was born, Jason Ray Wilson; then the second, Justin Valley Wilson; then the third, Shonda Kay Wilson Melton. These children were the light of her life. She cried for them and with them their entire lives, but most of the time they didn’t know it because that’s how she was. She prayed for them diligently and they survive along with their spouses, Heather Wilson and Robbie Melton. Sharon worked at Phillips Petroleum Co., for about 10 years, Tri County Technology Center for 4 years and Dewey Public Schools for 5 years. She loved to watch her children at anything they did…football, baseball, softball, track, music, coaching, or just talking and laughing together. Her children, grew up too fast in her opinion, and then they began to have children of their own. Her grandchildren meant the world to her as well. She is survived by grandchildren, Britany Nichole, Chase Bryant, Bailey Dawn, Madison Blake, Michayla, Elias, Jackson Samuel-Ray and Jaeleen Renee and 3 little great grandchildren, Braxton and Bryson Anton and Wilder James Coolbaugh. Her family meant the world to her and he wanted to make sure that they didn’t have to guess at that. She always worried if she didn’t make someone feel loved. She is also survived by her mother, Mildred Lodema Gordineer, and her only sibling, Craig Leroy Gordineer and nieces, Ashley, Amanda, Leslie and Savannah. She is survived by several friends of many years including a lifelong friend, Pat Eoff Parrish. Pat and Sharon grew up together on the same block, with their grandparents being neighbors. They were together every day like sisters until junior high, and during the years have remained friends. Two other special ladies, Betty Henderson and Peggy Brower have been her friends since the 1980’s and have been prayer warriors for her in many situations. Sharon’s father, Ralph Gordineer passed away in 2009. In 2006 she opened up her own busines, Mimi’s Antique Market. Sharon liked to “junk”. It seemed the right business for her to venture into. She enjoyed going to work and finding bargains and treasures and Lonnie, her husband of 50 years, who still made her heart flutter, liked to join her on hunts for the next big thing. Lonnie was always so complimentary to her that she began to think she actually looked like he said she did, which was beautiful. Sharon and Lonnie spent many happy years together and saw each other thru three episodes of cancer. They traveled for a few years and saw many of the things on their bucket list. If you could ask her, Sharon would say she’s had a wonderful life.

Sharon Kay Wilson&#8217;s journey here on earth ended June 15, 2020 and her new journey began immediately afterwards in Heaven with her Lord and Savior. Sharon spent many years loving her family and Jesus. She would suggest that everyone not... View Obituary & Service Information

The family of Sharon Kay Wilson created this Life Tributes page to make it easy to share your memories.