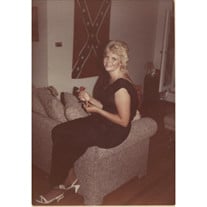 Memorial services for Sharon Elaine Smart, 65 of Skiatook, Oklahoma will be held Friday, January 13, 2012 at 1:00 p.m. at the United Methodist Church, in Skiatook, Oklahoma with Pastor Norman Wasson officiating. Interment in Osage Garden Cemetery is under the direction of Peters-Stumpff Funeral Home. Musical selections for the service are "Wind Beneath My Wings" and How Great Thou Art", with pianist Debbie Seals and vocalist Robin Edens. Sharon passed away on January 10, 2012 at her residence. She was born September 11, 1946 in McAlester, Oklahoma to Gosta Richard and Hattie Elaine (McCallen) Anderson. She was a graduate of Atherton High School in Louisville, KY. She married Leslie Arthur Smart on December 24, 1984 in Malone, New York. They moved to Skiatook in 1999 where she was a member of the First United Methodist Church and the United Methodist Woman's group. Sharon worked as a manager for many credit unions including Clark County Federal Credit Union in Jeffersonville, IN (Louisville, KY). Her favorite job though was working as a supervisor in the mortgage department for Avery-Savery. In 1988 Les and Sharon returned to the United States from Canada and it was at this time Sharon decided to stay home and raise their children. She was a member of the Memphis Amateur Hockey League where she was on the Board of Directors. Being a devoted hockey mom she designed the team logo for the jersey for the Memphis Eagles. Sharon was active worker of the Lupus support group in Memphis from 1989-1991. She also was the founder and facilitator of the N.E. Mississippi Lupus Support Group from 1991-1996. In 1999 Sharon revived the defunct Tulsa Lupus support group and ran it as facilitator until 2004 when she became to sick to work. She is survived by husband Les of the home, four children: Stacey Lynn Norris and husband Tim of Senatobia, MS; Jennifer Dawn Reiter of Amherst, OH; Leslie "Matt" Matthew Albert Smart and wife Crystal Louise of Franklin, TN; Brent Damon Miles and wife Merry Shannon of Rocky Mountain, NC; eight grandchildren: Lance Corporal Timothy Norris Jr., Nolan Louis Reiter, Morgan Elizabeth Reiter, Kristen Danielle Blocker, Alexi Elizabeth Smart, Loren Grace Smart, Joseph Matthew Smart, and Katlyn Elisabeth Miles, a sister Cynthia Denise Anderson of Louisville, KY; two nieces Kristi Metcalf and Lelia Angelica DiFazio and a nephew Vincent Robert DiFazio. She was preceded in death by her parents. In lieu of flowers donations can be made to the following organizations: Lupus Foundation of America www.Lupus.org Sjogren's Syndrome Foundation www.Sjogrens.org Petersstumpfffuneralhome.com

The family of Sharon Elaine Smart created this Life Tributes page to make it easy to share your memories.

Send flowers to the Smart family.