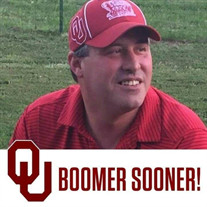 Scott Andrew Fowler, born in Biloxi, Mississippi, on October 8th, 1974, returned to Heaven while at home on Sunday morning, January 23rd, 2022. During Scott’s youth, his mother and father encouraged and nurtured his talent and love of baseball. He was a natural athlete at almost anything he took a liking to. After graduating from Dewey High School, in 1992, Scott attended Connors State College and was recruited for a minor league baseball team with potential draft to the Boston Red Sox. Injuring his rotator cuff, he was unable to continue in that pursuit. He then moved to Texas, living with his Aunt Susan Dum, while studying at Odessa College and possibly skipping a few classes. Retuning to Oklahoma in 1999, he was happy to enjoy another round of playing baseball. This time he was able to do that at Oklahoma Wesleyan University with his partner in crime and younger brother, Justin “Byrd” Fowler. He at one time roomed with Byrd and this is where he met his future sister-in-law, Kristal and created fond memories with his nephews and nieces Jared, Titan, Jerzie and a little later, Pumpkin Pie (Dawson Faye). Still, Scott felt the call of the road and traveled to Ohio, Illinois and Alaska among other states while working at various manufacturing jobs. He had a few pit stops and help along the way, including staying with his loyal and devoted sister and brother-in-law, Lindsey and Michael Creek, which bonded him closely with his niece and nephews, Devin, Paige and Chase. Eventually, he got his first break with Gentzler Electric in Texas where he began his trade as an electrician. In December of 2021, he earned his Journeyman’s license with incredible pride in that accomplishment. Scott’s personality was larger than life and he filled the room with it. Quick wit, playful razzing of nephews and nieces and a ready hug, were part of his entrance. He was loyal, he was stubborn and definite in his opinions. He loved his family and friends fiercely. Scott also loved God and was a member of Church on the Move in Tulsa. Always there to pitch in or lend a hand or argue adamantly about politics and his true love, sports. He always loved to play Corn hole and talk a big game while he played with his family. To say he was a die-hard OU fan is putting it politely. Know that he will love that several of us have arrived representing his favorite team. And some of you know he decorated the pvc pipe of Austin Texas Stadium with his Boomer Sooner love. It probably wasn’t ethical, but it was definitely Scott. He leaves behind the love of his life and partner, Carmen DeTurk and her children Megan, Brett and Kayden “Midge”. They met in 2016 and fell in love after a 13-hour marathon conversation. They loved and they fought. They were each other’s match in almost every way. He once said that maybe he had never really known what it was to love someone until he met her. And she knew when he said it, it was the truth. To her comfort, the last words he heard from her before he passed were, I love you and a kiss. He also leaves behind his loved and cherished mother, Linda Katherine Dum Fowler. His loved father and stepmother, Ricky Walter and June Fowler. His favorite brother and sister-in-law, Justin “Byrd” and Kristal Fowler, His beloved sister and brother-in-law, Lindsey Nichole and Michael “Mikey Dale” Creek. His adored nieces and nephews, Devin, Jared, Jerzie, Titan, Paige, Chase and last but not least Dawson Faye. His dear uncle and aunts: Frank and Jing Jing Dum, Susan Dum, Joann and Bill Heitman and Rose and Matthew Clark. This along with a host of cousins from all sides. Scott was preceded in death by his maternal grandparents, William Anthony and Mary Ann Dum, his paternal grandparents, James and Dorothy Fowler and his uncles, Roy Fowler and William Anthony “Tony” Dum Jr. Legacy Touch: DZ9UCVJV

Scott Andrew Fowler, born in Biloxi, Mississippi, on October 8th, 1974, returned to Heaven while at home on Sunday morning, January 23rd, 2022. During Scott&#8217;s youth, his mother and father encouraged and nurtured his talent and love of... View Obituary & Service Information

The family of Scott Andrew Fowler created this Life Tributes page to make it easy to share your memories.

Send flowers to the Fowler family.