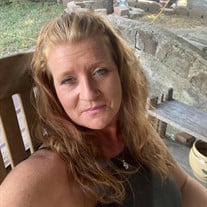 Sara Michelle Knight was born on July 5, 1972, in Nowata, Oklahoma, to Kenneth Hiram Storm and Linda Brown (Northrup). She left her earthly home on May 13, 2022, surrounded by her friends and family at her home in Lenapah, Oklahoma. Sara was raised and educated in Lenapah, Oklahoma, and graduated from High School with the first graduating class of Oklahoma Union School in 1990. While in school, Sara met and became best friends with Jason Heath Knight. Sara soon found out that Jason and herself were born just hours apart in the Nowata Hospital, Sara being born on July 5, 1972, and Jason on July 6, 1972. After being best friends all through school, they became Husband and Wife on September 24, 1994. They were married at the First Baptist Church in Nowata, Oklahoma. In May of 1995, Sara and Jason had their first child, a daughter named Lindsay, and in December 1997, their son, Jacob was born. They lived just 3 doors down from the house Sara was raised in. Sara welcomed her first grandchild, Maci Jo in May of 2012, and is expecting her first grandson on October 28, 2022. Sara was trained to be a CNA and a Pharmacy Technician and worked at the Nowata Nursing Home and Cherokee Nation. Sara was always “the life of the party”. She was always smiling and was the person everyone wanted to be friends with. If you were friends with Sara or even close, you knew she was a caretaker and had a beautiful soul that radiated inside and out. Sara loved going to the lake, shopping, and spending time with her friends and family. Sara accomplished many things in her life, but her biggest accomplishment was being the best Mother, the mother she always wanted and dreamed of being. Although Sara’s Mother was Linda Northrup, she was raised by Catherine and Ivan Dale Brown in their home in Lenapah, Oklahoma. Sara was preceded in death by Catherine and Ivan Dale Brown, Kenneth Hiram Storm, Raven Jade Tiry, and Jason Heath Knight. Her surviving loving family members include her daughter, Lindsay Nicole Knight, her son, Jacob Hiram Knight, her granddaughter Maci Jo Hawn, Sandra (JoJo) Calvert/McWilliams, Patti Richards, Missy Brown and her mother-in-law and father- in-law Patsy and John Knight. Sara was expecting her 1st grandson in October. Sara had many friends and family that she took care of as her own. Services have been entrusted to Stumpff Funeral Home at 620 E. Cherokee, Nowata, Oklahoma 74048. Visitation will be held Thursday, May 19, 2022, at Stumpff – Nowata Chapel 620 E. Cherokee, Nowata, Oklahoma 74048 from 9:00 am – 6:00 pm. The funeral service will be held on Friday, May 20, 2022, at First Baptist Church in Nowata, Oklahoma 74048 at 2:00 pm.

Sara Michelle Knight was born on July 5, 1972, in Nowata, Oklahoma, to Kenneth Hiram Storm and Linda Brown (Northrup). She left her earthly home on May 13, 2022, surrounded by her friends and family at her home in Lenapah, Oklahoma. Sara was... View Obituary & Service Information

The family of Sara Michelle Knight created this Life Tributes page to make it easy to share your memories.

Send flowers to the Knight family.