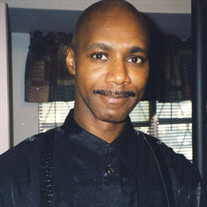 Samuel H.”Sonni” Landrum II Samuel Landrum died on May 8th, 2021 in Bartlesville, Okla. after a courageous battle with brain cancer. He was born October 28, 1950 in Tulsa, Oklahoma to Mellon and Sadie Willis Landrum. His paternal grandmother, Hallie Bolden Landrum, a certified midwife, assisted with the delivery at the family home. He grew up in Tulsa graduating from the Booker T. Washington High School with the class of 1969. As a child, his mother nicknamed him Sonni and he carried it throughout his life. Sonni’s working career included Manager of Menswear for Steinmart and later for Kuppenheimer. It was at that time that he met his best and life-long friend, Rene Jefferson. Later in life he worked with people, who were victims of traumatic brain injuries, a calling which required a huge amount of caring and compassion. On September 15, 2010 Sonni met Greg Smith. He moved to Bartlesville where they made their home together until his death. Sonni had a green thumb. He loved gardening and working in the yard. He would often buy sick and neglected plants on the sale rack just to nurture them back to health and let them thrive. Sonni was preceded in death by his parents Mellon and Sadie Landrum and an infant brother Cornell. He is survived by his partner, Greg Smith of the home, daughter Carla Burns (Gerard )of Dallas, daughter Chantelle Gilmer of Dallas, son Sam Landrum of Tulsa, brother Reverend Lorenzo Landrum ( Donericia), brother Bishop Carl Landrum (Marshalene )of Kansas City, Mo., and sister Marilyn Ann McCowan(Robert Curry). Additionally he had four grandchildren and five great grandchildren. He is also survived by Greg’s daughter, Lauren Smith of Tulsa. Funeral arrangements are under the direction of Stumpff Funeral Home in Bartlesville and Butler- Stumpff & Dyer Funeral Home in Tulsa. A viewing and visitation will be held Wednesday May 19th from 5:00 to 8:00 PM at Stumpff Chapel in Bartlesville. Funeral services are scheduled for Friday May 21st in Tulsa.

Samuel H.&#8221;Sonni&#8221; Landrum II Samuel Landrum died on May 8th, 2021 in Bartlesville, Okla. after a courageous battle with brain cancer. He was born October 28, 1950 in Tulsa, Oklahoma to Mellon and Sadie Willis Landrum. His paternal... View Obituary & Service Information

The family of Samuel H. "Sonni" Landrum II created this Life Tributes page to make it easy to share your memories.

Samuel Landrum died on May 8th,...