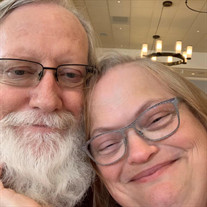 Samuel Lee Coin Jr., 63, of Bartlesville, died at 3:23 P.M. on Monday, December 7, 2020 at the Jane Phillips Medical Center in Bartlesville. Private services will be held at a later date and cremation arrangements are under the direction of the Stumpff Funeral Home & Crematory. Sam was born at Okinawa, Japan on October 9, 1957 the son of Samuel Lee Coin Sr. and Mary Ann (Black) Coin. He grew up and received his education at various locations around the world during his father’s career in the military. He attended Victoria College at Victoria, Texas and then the University of Houston where he received his Bachelors Degree in Business Administration with an accounting Major in 1998. He was employed with Coastal Petroleum in Houston which later merged with El Paso Petroleum. He later joined ConocoPhillips in Bartlesville and was currently employed with Phillips 66 as a Senior Analyst of Closing & Control. As an adult he has been active as a volunteer for over 10 years with the Boys Scouts of America in Victoria, Texas and Richmond, Texas.He was married to Angela Marie Riley at Victoria, Texas on March 6, 1992. Sam was a history buff, and was also interested in ancestry as well as World War II history, gardening, fishing, magnet fishing and taking cruises with his wife. He also liked to relax at home in front of the TV. Survivors include his wife, Angela Marie Coin of the home in Bartlesville, four children, Zachary Adam Riley of Victoria, Texas, Joshua Eric Riley of Bartlesville, Samuel Lee Coin III and wife Sarah Rose Coin of Tulsa and Christopher Alan Coin and fiancée, Kayleigh Louise Adams of Bartlesville, two sisters, Cindi Barnette of Austin, Texas, and Dorothy (Dottie) Sweat of Victoria, Texas, a niece, Nikki Barnette, nephews, Michael Coin, Samuel Sweat and Jeremy Sweat. He was preceded in death by his parents, a sister, Catherine Coin and a niece, Jackie Barnett.

Samuel Lee Coin Jr., 63, of Bartlesville, died at 3:23 P.M. on Monday, December 7, 2020 at the Jane Phillips Medical Center in Bartlesville. Private services will be held at a later date and cremation arrangements are under the direction of... View Obituary & Service Information

The family of Samuel Lee Coin Jr. created this Life Tributes page to make it easy to share your memories.

Send flowers to the Coin family.