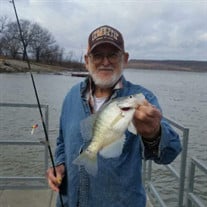 Samuel Barnes passed away on October 24, 2021, in Bartlesville, Oklahoma, at the age of 83. He was born to Alvin Samuel Barnes and Virginia Burris on June 15, 1938, in Gallatin, Texas. On June 20, 1956, Samuel married the love of his life, Wilma Roberta Barnes. He spent most of his working years in brick masonry. Samuel enjoyed fishing, hunting, gardening, camping, filming family documentaries, and helping Wilma care for her many beloved animals. He is preceded in death by his wife, Wilma “Bert” Barnes, his son Danny Barnes, both of his parents, Alvin and Virginia Barnes, his brothers Robert and Billy Barnes, and one sister, Mary Barnes. Samuel is survived by his brothers James “Bubba”, and Roy Dale Barnes, his sister Martha Boland, his daughter Sandy Wood, his son Tim Barnes, grandchildren Tasha Vanscyoc, Jessica Strain, Adam Wood, Nanette Oliver, Jemilly Pruett, Chad Barnes, and many great-grandchildren. Private family services will be held at a later date and cremation is under the care of Stumpff Funeral Home and Crematory. Legacy Touch Pin: DXPBJK9X

The family of Samuel Elijah Barnes created this Life Tributes page to make it easy to share your memories.

Send flowers to the Barnes family.