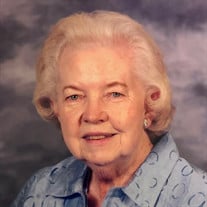 Ruth Hodges Tatroe was born December 22, 1927, in Okemah, Oklahoma. She was the sixth of seven children born to Rev. JW Hodges and Myra Hodges. The family moved to El Reno, Oklahoma in 1934, where Reverend Hodges was the pastor of 1st Baptist Church for 20 years. Ruth graduated from El Reno high school in 1945. The Hodges family enjoyed many musical activities. All family members were encouraged to use his or her musical talents in church choirs. Ruth graduated from Oklahoma Baptist University with a degree in vocal music in 1949. She taught vocal music at Altus high school for one year. Ruth met and began dating Paul Tatroe in college at Oklahoma Baptist University after he returned home from serving as a 2nd Lieutenant in the army during WWII. They married in 1950 and settled in Bartlesville, where Paul joined his father in the family business, Tatroe’s Glass and Planning Mill. Ruth and Paul enjoyed a common interest in classical as well as sacred church music, and often performed duets together as long-time members of Bartlesville’s 1st Baptist Church, where Ruth was active in the adult choir and directed several children’s church choirs while her daughters were young. For many years Ruth enjoyed spending her Monday nights as a charter member of the Bartlesville Choral Society. Paul was a charter member of the Bartlesville Symphony orchestra, where he played flute for over 25 years. Ruth taught piano and voice lessons in the family home for 40 years before making the brave decision to begin organ lessons. After passing her national organ guild in her 60s, Ruth spent the next 20 years as a church organist, 13 of which were spent at St. John’s Catholic church, where she retired at age 85. During this time, she was so pleased to own her own full rank pipe organ in the home, which Paul and everyone else enjoyed a great deal. Ruth and Paul were happily married for 54 years before he passed on in 2004. On March 1, 2022, Ruth gently slept her way into the arms of her Savior, Jesus, and was reuinited with her beloved husband, Paul. Ruth is survived by three daughters; Nancy & Gaston Arrieta of Austin, TX. Guyla and DannieTaylor of Lenexa, KS, and Linda King of Bartlesville. 6 grandchildren: Adrianne, Jessica, Andre, Loretta, Allison & Benjamin. And 7 great grandchildren: Evan, Faith, Tytus, Santiago, Isabela, Wells, and Freddie Rae. Tax deductible memorial donations may be made to BARTLESVILLE CHORAL SOCIETY PO Box 283 Bartlesville, OK 74005 Earmark “Ruth Tatroe Memorial”

Ruth Hodges Tatroe was born December 22, 1927, in Okemah, Oklahoma. She was the sixth of seven children born to Rev. JW Hodges and Myra Hodges. The family moved to El Reno, Oklahoma in 1934, where Reverend Hodges was the pastor of 1st Baptist... View Obituary & Service Information

The family of Ruth Hodges Tatroe created this Life Tributes page to make it easy to share your memories.

Send flowers to the Tatroe family.