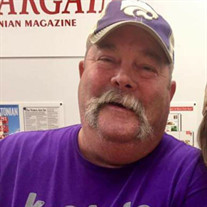 Rusty Lee Hill, 65, of Chelsea, Oklahoma, formerly of Wamego, Kansas, died Tuesday, December 8, 2020. Rusty was born July 18, 1955, in Hastings, Nebraska, to parents James Leroy Hill and Beverly Anne Laflin. He graduated from Wamego High School in 1973. He worked at Steel and Pipe from the time he was 18 until he retired in 2013 (43 years) as the Assistant Manager. Rusty was married to Dalene Domeny Hill on June 2, 1973. He was a devoted husband and family man. The couple loved watching March Madness together and trying to fill out the perfect bracket. Few people know that the love story between Russ and Dalene actually began in the early 60s when they were both very young. After Dalene apparently had a spat with her parents over a piece of candy, she decided to run away from home. It just so happened that Russ’ dad Jim, who was the Wamego Police Chief at the time, found Dalene walking alone and took her home while he tried to locate her parents. As Russ and Dalene sat around the kitchen table enjoying some fried chicken, Dalene must have forgotten all about the candy and the first spark was ignited. Years later the love story continued for the smitten teenagers and the two high school sweethearts married shortly after graduation. And so, the love affair that started over a piece of fried chicken and lasted for 37 years on Earth will now last for eternity in Heaven as they are finally in each other’s loving arms again. He was eternally optimistic and never had a bad day! He loved to laugh and tell stories and enjoyed a good party and playing softball. He was a patriot through and through and loved the Chiefs, KSU Wildcats, the Cubs and John Wayne. He was excited to hear that he was going to be a great grandfather. Rusty was preceded in death by his wife, Dalene Hill, Father Jim Hill and brother Rod Hill. He is survived by his daughter Janelle and husband Ben Woodward of Wamego, KS; grandchildren Brittney and Joe Reese, Aviano Italy, Brooke Woodward and Breck Woodward; Mother Bev Hill of Bullhead City, AZ; siblings Randy and Marlynda Hill of Lenexa, KS, Robert and Mary Lough of Wamego, KS, Rhonda and Pat Hopkins of Bullhead City, AZ, Dane and Gayle Hill of Florida, James and Amy Hill of California; friend Jan Guthrie and family of Chelsea, OK and numerous aunts, uncles, nieces and nephews. Due to Covid safety and love for others, a celebration of life will be held at a later date.

The family of Rusty Lee Hill created this Life Tributes page to make it easy to share your memories.

Send flowers to the Hill family.