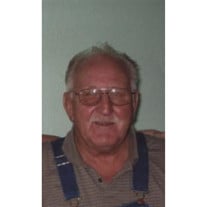 Funeral services for Ronnie "Red" Dale Mattison, 69 of Skiatook, Oklahoma will be held Thursday, January 5, 2012 at 2:00 p.m. at the First Baptist Church in Skiatook with Pastor Kelly Chronister officiating. Interment in Osage Garden Cemetery in Skiatook, Oklahoma is under the direction of Peters-Stumpff Funeral Home. Casket bearers for the service are Cristopher Mattison, Bradley Mattison, Darren Latty, Chris Hoy, Jeff Erving and Bob Enloe. Musical selection for the service was "Landslide". Red passed away on January 1, 2012 at Hillcrest Hospital in Tulsa, Oklahoma. He was born October 4, 1942 in Tulsa, Oklahoma to John Paul and Mabel Lorraine (Brewer) Mattison. Red was raised in Berry Hill and was a graduate of Berry Hill High School. He married Ruth Ann Stockdale on December 14, 1962 in Tulsa, Oklahoma. They moved to Skiatook in 1970 where they made their home. Red worked for 30 years as a boiler maker and was a member of the Local 592 Union. During his life Red also had his own businesses he enjoyed operating. He had Red's Drive-In from 1984-2001, Redtop Trucking and L&M Muffler Shop which he was still active in running. He is survived by his wife Ruth Ann of the home, 3 children: Ricky Mattison and wife Carol, Rodney Mattison all of Skiatook; Tammy Mattison of Owasso; 7 grandchildren: Cristopher, Laura, Bradley, Britney, Victoria, Christa and Casey, 2 great grandchildren: Mattison Seaba, MaKenna Lee, 2 brothers: Johnny Mattison and wife Phyllis of Mannford, Tommy Mattison and wife Carolyn of Tulsa; and a sister Bonnie Davis and husband Kenneth of Oklahoma City. He was preceded in death by his parents. www.Peters-Stumpff.com

The family of Ronnie Dale Mattison created this Life Tributes page to make it easy to share your memories.

Send flowers to the Mattison family.