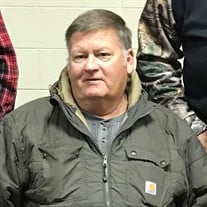 Ronnie Ray Griggs, 68, of Dewey, Oklahoma passed from this life on Thursday, September 23, 2021. Ronnie was born on February 13, 1953, to Evelyn Viola Cook (McCowan). While attending College High School and Tri-County Tech, he worked at the City of Bartlesville and Timmons Oil Company. After High School, Ronnie worked at TRW Reda Pump from 1972-1981, then finally went on to own his own business Ronnie Griggs Backhoe and Dumptruck Service where he met many of his lifelong friends. He enjoyed spending time at the racetrack, this was a love that he passed on to his son Josh and grandson Tyler. Ronnie married Doretta Ice on August 22, 1975, in Bartlesville, Oklahoma. They made their home in Dewey, Oklahoma with their two children Crystal and Josh. Ronnie was a great father and Papa. At the time of his death, Ronnie was working on building his legacy by passing on his many years of experience on to his grandsons, Tyler Griggs and Gavin Miller. He loved being able to spend his time working with them and teaching all he could so they could become all that he knew they could be. Ronnie loved spending time with his family and his friends especially if it involved a good hamburger or steak. Ronnie may have been hard on the grandsons, but the granddaughters were a different story. Ronnie is survived by his wife Doretta Griggs, his mother-in-law Gladean Ice, two children Crystal and Danny Miller and Josh and Tiffany Griggs, four grandchildren, Kaylun (Baby Girl) Miller and Dylan Oates, Tyler (Tyler Ray) Griggs, Kadie (KadieBug) Griggs and Gavin (Gav) Miller, two great grandchildren Tuck (Tuckaroo) and Allie (Allie-Oop) Oates, one brother Gary Griggs, one sister Julia & Michael Morgan, sisters-in-law Adrene Linehan and Kay & Kenny Hamby, one Aunt Dorothy Hodges, several nieces and nephews and many friends. Ronnie was preceded in death by his mother Evelyn McCowan, father-in-law Earl Ice, his sisters Delores Griggs and Helen Bohannon, and sister-in-law Lora Griggs, niece AnaMaria Castro. Funeral arrangements are pending with Stumpff Funeral Home in Bartlesville.

Ronnie Ray Griggs, 68, of Dewey, Oklahoma passed from this life on Thursday, September 23, 2021. Ronnie was born on February 13, 1953, to Evelyn Viola Cook (McCowan). While attending College High School and Tri-County Tech, he worked at the... View Obituary & Service Information

The family of Ronnie Ray Griggs created this Life Tributes page to make it easy to share your memories.

Ronnie Ray Griggs, 68, of Dewey, Oklahoma passed from this life...

Send flowers to the Griggs family.