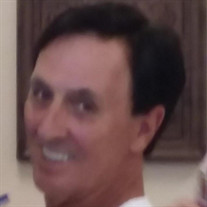 Roger “Danny” Woolery, age 70, was born to Roger and Veronica Woolery in Tulsa, OK and raised in Bartlesville. After high school, he volunteered for the Navy and experienced combat in Vietnam. Upon honorable military discharge, he returned to Oklahoma and served his community as a long-time law enforcement officer with the Bartlesville Police Department. Although he seldom spoke of his many good deeds, he was named 1995 Officer of the Year. He also received the Medal of Honor for risking his life to save children from an active shooter. After police retirement he gained another law enforcement family as a security guard at the Osage Casino. During that time he made several more friends and wonderful memories. Danny later entered into permanent retirement to devote his full attention to his ranch. In 2018 he married Elizabeth, a kindred spirit with whom he had maintained a friendship for over 20 years. They planned a long life together until his unexpected diagnosis of pancreatic cancer cut short their dream. The Salt Creek Ranch Boss made his final ride to Heaven’s gate on September 6, 2020 surrounded by loving family, comforting words, and the knowledge of the lasting imprint he made on those who knew him. He will be missed by not only his human family and friends, but also by the numerous four-legged friends which he rescued. Danny was preceded in death by his parents and his sisters Peggy Katherine (Kay) Woodall, Jo Lynn Anderson, and Linda Dale Gaines. He is survived by his wife, his sister Ve Ann Scott, daughter Erica Kirsop, brother-in-law Terry Gaines, many nieces, nephews, cousins, and one adoring grandson. A memorial service will be held on October 3, 2020 at 11am in City Church, 4222 Rice Creek Road, Bartlesville. In lieu of flowers, the family asks that donations be made to the SPCA, Hope in the Valley Equine Rescue & Sanctuary, or the Journey Home Hospice.

Roger &#8220;Danny&#8221; Woolery, age 70, was born to Roger and Veronica Woolery in Tulsa, OK and raised in Bartlesville. After high school, he volunteered for the Navy and experienced combat in Vietnam. Upon honorable military discharge,... View Obituary & Service Information

The family of Roger Danny Woolery created this Life Tributes page to make it easy to share your memories.

Roger “Danny” Woolery, age 70, was born to Roger and Veronica...

Send flowers to the Woolery family.