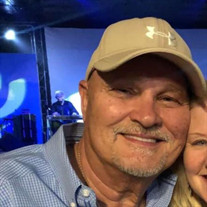 Robert Dwight Willson passed away peacefully January 29, 2022 in Bartlesville surrounded by his family and friends. Rob was born in Durango, Colorado on February 15, 1952 and grew up in Bartlesville, Oklahoma. Rob attended school in Bartlesville graduating from Col-Hi in 1971. After high school he served in the U.S Army for 6 years. He attended Business Administration College at Schofield Barracks in Hawaii and finished his Associates Degree in Business Administration at Dekalb College in Georgia. He also attended the University of Oklahoma. His passion in life was raising his two sons, coaching and working with youth leagues in basketball, baseball and football. He also enjoyed riding his Harley through the mountains of Blue Ridge and the Smokies with the love of his life "Miss Sherie". Prior to his retirement from Daemar, Inc in Lawrenceville, Georgia in sales management, he was employed by the Washington County Sheriff's Office and then later worked as Security for Phillips 66. He was a member of the East Cross Methodist Church in Bartlesville. Rob was also a 3rd generation member of the Delaware Cherokee Tribe of Oklahoma. He was proceeded in death by his father, Paul Willson and his sister Linda (Willson) Fugett. Rob is survived by his wife Sherie (Baldwin) Willson and children Cory Willson and wife Michele of Sugarhill, Georgia, Kristopher Willson and wife Hannah of Savannah, Georgia, Aaron Shivel and wife Shanda of Oolagah, Oklahoma and SunDee Jones and husband Ron of Bartlesville, Oklahoma. He is also survived by his mother Pat Willson of Eureka Spings, Arkansas, brothers James Willson and wife Kimberly of Lawton, OK, Gary Willson of Eureka Springs, Arkansas, Ron Willson of Nashville, Tennessee and sister Teresa Bennett and husband Brian of Eureka Springs, Arkansas and by 7 grandchildren, several nieces and nephews and great-nieces and nephews. A come and go Celebration of Life will be held on his birthday, February 15th at Sterling's Restaurant from 5-7pm

Robert Dwight Willson passed away peacefully January 29, 2022 in Bartlesville surrounded by his family and friends. Rob was born in Durango, Colorado on February 15, 1952 and grew up in Bartlesville, Oklahoma. Rob attended school in Bartlesville... View Obituary & Service Information

The family of Robert Dwight Willson created this Life Tributes page to make it easy to share your memories.

Send flowers to the Willson family.