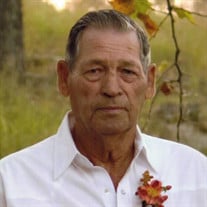 Mr. Robert Max Underhill, 86, longtime Dewey area resident, died at 10:32 A.M. n Saturday, October 3, 2020. Graveside services will be held at 2 P.M. on Wednesday, October 7, 2020 at the Dewey Cemetery with Mr. Rod Nicholas officiating and directed by the Stumpff Funeral Home and Crematory. Visitation will be at the Stumpff Funeral Home on Tuesday from 12 Noon until 8 PM and the family will receive guests at the funeral home from 7 PM until 8 PM. Mr. Underhill was born at Madill, Oklahoma on February 20, 1934 the son of John A. and Christine Underhill. He grew up and received his education in Madill in Marshall County, Oklahoma. He was married to Fyrma Elaine Arnold on January 14, 1984 at Scott City, Kansas. They made their home at Scott City until moving to Dewey to make their home in 1989. Mr. Underhill had been active working in the oil field all of his life and he loved to hunt and fish. He was also 32nd degree Mason. Survivors include five sons, Robert Lynn Underhill of Dewey, Gary Wayne Underhill of Madill, Larry Underhill and wife Patty of Copan, Kevin Underhill and wife Teresa of Copan and Steve Cunningham of Minneapolis, Minnesota, four grandchildren, B.J. Underhill, Lacy Hamilton and husband Tyler, Justin Underhill and Matt Underhill and wife Jimmre and three great grandchildren, Callie Jo Hamilton, Jentry Hamilton and Charlotte Underhill. He was preceded in death by his wife Fyrma Underhill on August 26, 2007 and by his parents, a brother and two sisters.

The family of Robert Max Underhill created this Life Tributes page to make it easy to share your memories.

Send flowers to the Underhill family.