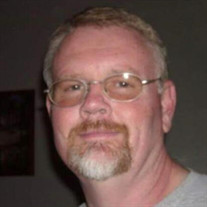 The community of Bartlesville lost a treasure when Robert Lynn Hard passed away on December 23, 2021. “Robby”was born October 14, 1961, to Robert and Patricia Hard in Farmington, Missouri. Robby grew up working on bicycles and dirt bikes, and fixing things became his lifelong passion. In the late 1970’s, he moved to Bartlesville and graduated from College High in 1980. Robby married Teresa Faye Tatum in 1982, and they had Tiffany Nicole and Cody Lynn. Robby was a self made man and worked hard for everything that he had. He worked multiple jobs at a time across his lifespan, including Interstate Batteries as a route leader, then he bought Limestone Texaco on Nowata Road in 1992. At Robby’s Texaco, where “everyday is lady’s day,” he began investing deeply in serving the automotive needs of Bartlesville. These investments included a full service gas station and auto repair, tires, propane and UHaul. Robby won multiple national and international awards for UHauI. His quick wit, commitment to excellence, compassion, listening skills and ability to build relationships made his multi-generational business successful for decades and a local tradition. Robby’s Texaco taught Tiffany and Cody how to set goals, work hard, serve customers and meet people’s needs. Due to multiple medical issues, he retired in 2020. Robby loved his family, racing, his dogs and cats, cooking, friends, and especially his grandson, Landon Matthew. Robby continued helping others until he left this world. His kindness, humor, work ethic, and humanity have left a legacy of pride for his daughter, Tiffany Hard Young, his son, Cody Hard, and his grandson, Landon Smith. Survivors include his daughter, Tiffany Hard Young and Cody Lynn Hard both of Bartlesville, and grandchildren, Landon Smith, Seth Young, Sean Young, Kruz Berreth, Carson Berreth and Madison Berreth. Robby was preceded in death by his parents and his grandparents. Services will lbe held at 10 A.M. on Thursday, December 30, 2021 in the Stumpff Funeral Home Chapel with Pastor Randy Keller officiating. Interment will be in the Memorial Park Cemetery directed by the Stumpff Funeral Home & Crematory. His family invites anyone whom Robby impacted to pay their respects and tell a story or two of how he touched their lives.

The community of Bartlesville lost a treasure when Robert Lynn Hard passed away on December 23, 2021. &#8220;Robby&#8221;was born October 14, 1961, to Robert and Patricia Hard in Farmington, Missouri. Robby grew up working on bicycles and dirt... View Obituary & Service Information

The family of Robert "ROBBY" Lynn Hard created this Life Tributes page to make it easy to share your memories.

The community of Bartlesville lost a treasure when Robert Lynn...

Send flowers to the Hard family.