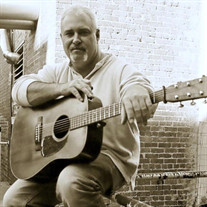 On April 26, 2021, Robbie Melton, loving husband, father and Poppy, peacefully ascended to Heaven. Born to Bobby Melton Jr. and Victoria Sue Sanders on May 25, 1964, Robbie was raised in the Washington and Osage County areas by his beloved mother, his Grandma and Grandpa Sanders, his Grandma and Grandpa Melton, and his step-father, George Galbreath. At an early age, Robbie began playing guitar, singing and writing songs. His Grandpa Melton taught him to play guitar and took him to bluegrass festivals, while his mom and Grandma and Grandpa Sanders taught him to sing ALL the parts. Robbie’s remarkable talents won many contests and the hearts of audiences and fans. After graduating from College High in 1982, Robbie continued playing bluegrass festivals including Silver Dollar City and the Tulsa Bluegrass & ChiliFest where he met many lifelong friends. In the early 90s, Robbie began working for the 11th Judicial Washington County Drug Task Force under Sheriff Pat Ballard. Robbie, Eddie Virden, Dennis Nix and Mike Buchanan made an enormous impact in the community that will never be forgotten. After many years, Robbie left police work turning his primary focus to his God-given musical talents. Robbie toured with Melonie Cannon, singing harmony and playing guitar with multiple performances on the Grand Ole Opry, Ryman Auditorium. He wrote several #1 bluegrass songs, and was well-known as a lyricist. His musical compositions live on. In 1988, his daughter Kelsey, the jewel of his eye, was born. Kelsey and her father had a special relationship and she credits her love of music as a gift from her dad. In 2006, Robbie began dating Shonda who would later become his wife and best friend. Robbie had a loving and giving heart. He was always helping someone. It is amazing that God poured so much goodness into one man. Robbie is survived by his wife, Shonda Melton; daughter, Kelsey Davis and husband Eric; two grandchildren, Kyler Logan and Kenzie Bella, all of Bartlesville; brother, Cody Galbreath of Ramona; father, Bobby Melton Jr. of Pawhuska, and many aunts; uncles; cousins; nephews and nieces. He is preceded in death by his brother, Lance Galbreath; mother, Vicky Galbreath; grandfather, Bobby Melton; grandmother, Mildred Melton; grandfather, Onie Sanders; grand-mother, Dora Sanders and step-father, George Galbreath. Graveside Service at Dewey Cemetery on Monday May 3, 11:00 a.m., with procession from Stumpff Funeral Home at 10:30 a.m. Family hosted visitation at Stumpff Funeral Home: Sunday. May 2, 2:00 - 8:00 p.m. Stumpff hosted visitation at Stumpff Funeral Home: Saturday. May 1, 9:00 a.m. - 5:00 p.m.

On April 26, 2021, Robbie Melton, loving husband, father and Poppy, peacefully ascended to Heaven. Born to Bobby Melton Jr. and Victoria Sue Sanders on May 25, 1964, Robbie was raised in the Washington and Osage County areas by his beloved mother,... View Obituary & Service Information

The family of Robert "Robbie" Allen Melton created this Life Tributes page to make it easy to share your memories.

Send flowers to the Melton family.