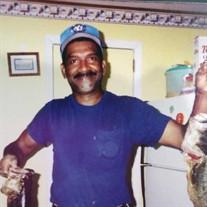 Robert Lee Peace, 69, of Nowata, Oklahoma, died Saturday, August 15, 2020. Robert was born January 19, 1951, in Nowata, Oklahoma, to Leon and Annie (Wise) Peace. He attended school at Alluwe, Oklahoma. Robert briefly lived in Denver, Colorado, but moved back to Nowata, Oklahoma until his passing. Robert married Lisa Lynch and to their union two children were born. Sometime later, he met and married Janice Parks and to this union their one child (dog) was born. He worked at the Nowata County for a number of years, Nowata Public Schools, as well as AIW in Coffeyville. Robert was a kind, gentle man who would help anybody so much that he would give the shirt off of his back. He was very laid back and easy going. Robert had a love for all people, especially his grandchildren. He was always giving them advise on life and how to build/fix cars, boats, housing issues, ect. He loved going fishing and also enjoyed drawing as well as gardening (it was called the community garden, as he had the best okra around). Robert enjoyed his raising the last of the children, his baby girl, “Sassy Peace” a pure German Shepherd that he acquired on April 2017. He would play catch with her and taught her tricks. He was preceded in death by his son Robert Peace Jr.; his parents; brothers Arthur Hatters, Ronald Peace, Gregory Peace, James Thompson, Bernard “Sonny” Thompson and sister Elaine Hughes. Robert is survived by his wife, Janice; son Will Jarmon of Denver; daughter Brittany Peace of Nowata; stepdaughter Tory Lynch of Tulsa; stepdaughter Gidget Eaton of Tennessee; sisters Ilene Langston of Little Elm, Texas, Margaret Curtis, Rita Nash and Wanda Hill, all of Nowata, Gloria Lewis of Plano, Laver West and Beverly Peace both of Kansas City; seven grandchildren; one great grandchild and a host of relatives and friends. A celebration of Robert’s life will be held on Saturday, August 22 at 10am at Stumpff Funeral Home Chapel in Nowata. Please wear your masks per family request.

The family of Robert Lee Peace created this Life Tributes page to make it easy to share your memories.

Send flowers to the Peace family.