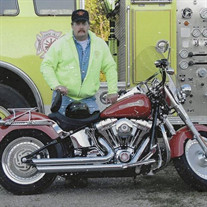 Robert “Bob” Eugene Levingston, 60, of Bartlesville, Oklahoma, died Thursday, July 11, 2019. Bob was born July 25, 1958 to parents Wilbur Ellis and Judith Kay (Spencer) Levingston in Bartlesville, Oklahoma. He graduated from Dewey High School in 1976. Bob served our country in the United States Navy from 1976 to 1981 and was stationed on the USS Ranger. He married Kassandra Watters on December 12, 1981 in Dewey, Oklahoma. Bob was a public servant in various ways. He was a first responder and Assistant Fire Chief for the Osage Hills Fire Department, EMS and Fire Instructor for OSU and was a Board member for the OHFD. He was also captain of the fire, member of the Tactical Rescue and medical response team and HAZMAT response at the Phillips Research Center. He enjoyed fishing, archery, and was well known for his gunsmithing and knife making skills. Bob was preceded in death by his grandparents Ralph and Opal Spencer; parents Wilbur and Judi Levingston and father in law John Watters. He is survived by his wife Sandy, of the home; mother in law Patty Watters; brothers Mark Flora and wife Lori Harbor and William (Bill) Levingston; nephews Jordan Flora, Curtis Evans and wife Trisha, Cody Harbor, Dylan Villenueve, Lucas and Tobias Watters, James Preston, and Lance Witherow; nieces Kayla Harbor, Rachel Monday, Jessica Watters, Sasha Burge and Cindy Evans and other dear family members and friends.

The family of Robert Eugene Levingston created this Life Tributes page to make it easy to share your memories.

Send flowers to the Levingston family.