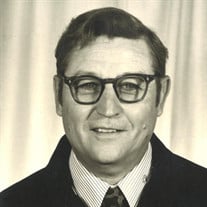 Robert (Bob) Lee Henson, age 96, passed from his earthly life on May 28, 2022, in Bartlesville, Oklahoma. Robert was born on July 27, 1925, in Barnsdall, Oklahoma to his Father Nathan Edward Henson and his Mother Pearl Catherine Miller Henson.... View Obituary & Service Information

The family of Robert Lee Henson created this Life Tributes page to make it easy to share your memories.

Send flowers to the Henson family.