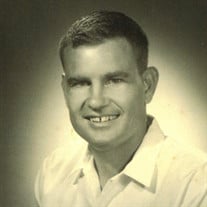 Mr. Robert Lewis Haymaker, 82, Oglesby, died early Tuesday, January 19, 2021 at his home east of Oglesby. Graveside services will be held at 2 P.M. Friday, January 22, 2021 at the Oglesby Cemetery with Rev. Eugene Hewitt officiating and directed by the Stumpff Funeral Home & Crematory. Visitation will be at the Stumpff Funeral Home on Thursday from 9 AM until 8 PM and the family will receive guests at the funeral home from 5 P.M. until 7 P.M. Mr. Haymaker was born in Bartlesville on January 7, 1939 the son of Reverend Lewis Alfred Haymaker and Alice (Little) Haymaker. He grew up and received his education in the Bartlesville area and graduated from College High School. He was employed for a number of years with Phillips 66 stations in Bartlesville operated by Tom Sas. He attended technical school to become an electrician and was a journeyman electrician with IBEW # 584 from 1973 until his retirement in 2003 after 30 years. He was married to Anita Marie Tennant on November 2, 1984 and they have made their home in the Oglesby area. Mr. Haymaker was very active in Micromidget racing in Bartlesville at the track on Tuxedo Blvd. from the 1950s until the 1980’s. Crossing the finish line in #97, the candy apple red car. He was 4th in the nation in 1964. He had also obtained his private pilot’s license and enjoyed spending time with his grandkids and their activities. He had attended the Assembly of God Church. Survivors include his wife, Mrs. Anita Haymaker, three children, Robert Lewis Haymaker Jr. of Bartlesville, Deanna Lynn Severson and her husband Kenneth Pocock of Bartlesville and Roger Lee Haymaker and wife Debbie of Collinsville, two sisters, Carolyn J. Wilkinson of Bartlesville and Rebecca Sue Wilson of Cushing, a special brother, Raymond W. Tennant, four grandchildren, Kelsey Mae Berry, Ryan Lee Haymaker, Ryce Loyd Haymaker and Wyatt Lewis Severson and two great grandchildren, Everly Mae Berry and Everett Wade Berry and numerous nieces and nephews. He was preceded in death by his parents, a sister, Kay Fluty, two brother-in-law, Curt Wilkinson and Charles Fluty and his mother-in-law, Onida Tennant and sister-in-law, Nancy Tennant.

The family of Robert Lewis Haymaker created this Life Tributes page to make it easy to share your memories.

Send flowers to the Haymaker family.