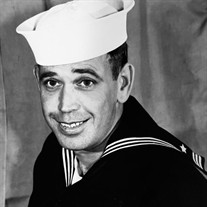 Robert E. "Sonny" Wood was born in Richland, Missouri September 18, 1936. He moved to Bartlesville with his family that same year. He went to be with the love of his life on Wednesday January 19th, 2022. He was 85 years old. Robert and Mary Jacqueline "Jackie" Rose were married on June 17th, 1955. They were married for 34 years. After 16 years of marriage and traveling around the country they settled in Bartlesville and Angela Denise Wood was born. Then 22 years later grandson Tyler Gage Barnhart was born. Next came Chase Michael Scott and then Chandler Bryce Scott. Finally, great grandson Jäger Gage Barnhart was born in December 2021. He was very proud of his grandkids. He loved all of his family and friends very much. Robert worked as a carpenter before joining the Navy in 1962. He served aboard the USS Los Angeles, USS Piedmont, USS Columbus and then the USS Kitty Hawk from January 1964 until May 1966. He was also a photographer on the ship and took many amazing photos. The Kitty Hawk lost 31 men while he was aboard. He made many lifelong friends. He received the Vietnam Service Medal and the 4 year good conduct medal. Robert and Jackie lived in Long Beach and San Diego California and Bremerton, Washington before returning to Bartlesville in 1966. He continued in construction and joined the Carpenters Local Union 1659. He was elected business represenative and Financial Secretary for 5 years before Local 1659 merged with Tulsa 943. He was working for Zachry Construction at the Phillips Carpenter Shop when he retired. Robert, Jackie and Angela had a cabin at Sunset Lake and spent most weekends there boating, fishing, jet skiing, swimming and being with a great bunch of friends and family. He loved woodworking and working with his hands. He could build anything. He loved to travel with his family. He would customize his vans and go to "van shows". He also loved to go to the Walnut Valley Festival in Winfield, Kansas to listen to his family play Bluegrass. Most of all he loved spending time with his grand kids. He was preceded in death by his wife Jackie in 1989, his grandparents George and Anna Sears, Mother Edith (Sears) Robinson, sister Mildred E. (Wood) Melton and her husband W.S. Melton, nephew Robbie Melton, Aaron Hale and numerous aunts, uncles and cousins. Too many to count. All of them waiting to meet him at the gates of Heaven. He was remarried to Vickie (Jodi) Summers and then Charlene Wickham. He remained very good friends with them and their families. He is survived by his daughter Angela Denise (Wood) Scott and fiance Clint Kohout. His grandsons Tyler Gage Barnhart and girlfriend Torrie Hennesy, Chase Michael Scott and Chandler Bryce Scott. Great grandson Jäger Gage Barnhart. Nephews Bobby Melton and wife Julie and Rick Melton. Niece Judy Hale and great nephew Josh Hale and wife Jocelyn. Great niece Kelsey (Melton) Davis and family in Fort Worth, Houston and Kansas City and more in Bartlesville and lots of longtime friends. Legacy Touch:DUEWHN87

Robert E. "Sonny" Wood was born in Richland, Missouri September 18, 1936. He moved to Bartlesville with his family that same year. He went to be with the love of his life on Wednesday January 19th, 2022. He was 85 years old. Robert... View Obituary & Service Information

The family of Robert E. "Sonny" Wood created this Life Tributes page to make it easy to share your memories.

Send flowers to the Wood family.