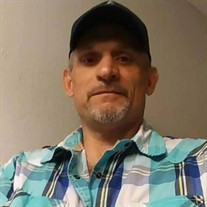 Richard Allen Swanson, 49, of Tulsa, Oklahoma, dies on May 25, 2021. He was born to Alfred B. Swanson and Sandra L. Swanson on April 10, 1972, in Pawhuska, Oklahoma. He attended Barnsdall High School, Tri-County Tech, and worked as a machinist... View Obituary & Service Information

The family of Richard Allen Swanson created this Life Tributes page to make it easy to share your memories.

Send flowers to the Swanson family.